This header to the current John Walker website aptly celebrates a trading heritage which stretches back over 185 years – not bad going!


After the founding John’s death, the business became a limited liability company.  John’s son, Frederick, sold the business to Stephen Martin – whose descendant, also Steve, is the current proprietor.


The firm’s watch products ranged over a wide spectrum of quality from mundane timepieces to chronometers/repeaters.  The association with the railways included, as well as the supply of guards’ watches, maintenance of a huge number of station-mounted, Walker-signed clocks – so the name had a good chance of being subliminally burnt into the nation's horological consciousness.


This is the text of an advertisement from The Times, 1878:


Walker’s business had also come to be ‘advertised’ in the editorial of the paper with its coverage of his civil action against the firm of Milner & Son in February 1866.  Milner manufactured safes that were supposed to be thief-proof.  Walker sued them because a year earlier the Milner safe at his Cornhill premises was easily cracked and £6,000 worth of stock stolen, (including 465 watches).  Walker’s displeasure was heightened by Police assertions that the shop’s security practices were inadequate, that he, personally, was negligent.  I would imagine that he became apoplectic when his action failed on the grounds that the short space of time taken to break into the safe was not the central cause of his loss.  (The ringleaders of the thieves themselves had already been sentenced to twenty years' penal servitude).


This is an example of the ready availability of John Walker movements on eBay nowadays: 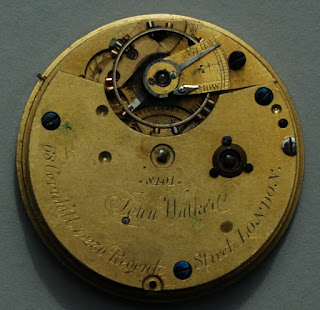 © David Buckden and TheOldWatchword, 2015-2022. Unauthorized use and/or duplication of this material without express and written permission from this site’s author and/or owner is strictly prohibited. Excerpts and links may be used, provided that full and clear credit is given to David Buckden and TheOldWatchword with appropriate and specific direction to the original content.