Fathers and Sons, Wealth and Insolvency

I recently completed a research project and consequent narrative article on a family of watchmakers stretching over 5 generations and covering the period 1738-1921.  The more I look into the lives of English Georgian/Victorian horologists, the greater I am impressed by their resilience.  Quite often bankruptcies occurred repeatedly, often by sons who inherited a father’s tendency towards impecuniosity as well as a liking/facility for working with wheels and springs.  I might be kidding myself, but I like to think that failures were usually the result of a maker’s over-concentration on innovation at the expense of revenue-generating productivity.  There is certainly some correlation in several instances between the taking out of a patent and the posting of a bankruptcy petition.  In this regard I immediately think of Ralph Gout – see my post http://theoldwatchword.blogspot.co.uk/2016/06/ralph-gout-man-or-brand.html .


Another is Charles Haley (& Son) described by Baillie as ‘A famous maker,’ whose patent, #2132, for a Marine Chronometer, was dated 17th August 1796, but who also was the subject of a bankruptcy notice printed in the London Gazette in August 1812.  Haley’s work does indeed look elegant, as evident in this circa 1804 Pocket Chronometer: 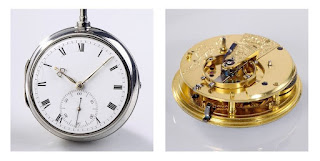 Courtesy of Calibre X
Haley sometimes used a letter code instead of a conventional movement number; examples seen include: M/CEC; FFA and PAM: difficult to figure to say the least.

Also worth a look is a circa-1813 gold-cased Pocket Watch with an unusual and attractive bezel: http://www.nationaltrustcollections.org.uk/object/1333460


Charles Haley, 7 Wigmore Street, was made a Freeman of the Clockmakers Company in 1781 and died in 1825.   He was a pioneer chronometer maker and was granted a patent, No. 2132, in 1796 for a constant force escapement. A watch fitted with this device is preserved in the Guildhall Museum, London*. He was appointed by the Select Committee of the House of Commons to report on Mudge’s timekeepers and application for a reward.


* This collection now installed at The Science Museum.


Incidentally, Thomas Mudge received a total of £3,000 as a reward from the Board of Longitude, largely as a result of the persistence of his son.  (Poor old Mudge Snr had little opportunity to enjoy the bulk of the grant, dying the following year.)  How grateful would Gout or Haley have been for such munificence - £279,500.00 in terms of purchasing power at current rates: no more selling off stock in a hurry with that much under the mattress!
Posted by davy26 at 08:50