The key is not only fascinating in its functionality, but looks good too:

Courtesy of the Trustees of the British Museum

It’s a small device, just 36mm in length.  The concept is elegant and simple: the motion induced in the key by the act of using it to wind a watch daily was also used to drive an internal train of toothed wheels such that information values displayed are updated by relevant 24 hours units.  The implementation of the concept is a little more complex!  The patent is number 777, dated 5th October 1762, referring to:

New-invented machine, called a Lunar and Calendar Watch Key, constructed upon mechanical principles, and adapted to every watch hitherto made, and acts thereon no otherwise than a common key; but, by means of a screw and wheels of a curious construction, is capable of shewing (sic), in the most accurate manner, the age of the Moon, the Day of the month, the revolution of the tides and several other motions; which said machine is also constructed to answer all the above-mentioned purposes independant (sic) of any watch whatsoever, and that in the most plain and easy manner, and will be of great benefit to His Majestie’s subjects, and more especially to those using the sea.

My article also reviews later (19 century) implementations of the same idea, most notably by Etienne Tavernier.  Some very attractive examples emerged from his Paris workshop, including this, from circa 1810: 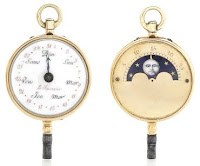 Etienne Tavernier was born in 1756 and died in 1839.  His brothers – Louis and Pierre Benjamin – both worked in the watch trade, as had his father, Jean Pierre.  Pierre Benjamin was famous as a casemaker supplier to Abraham-Louis Breguet, with whom Etienne also collaborated.