Since my last post here, I have finalised an article on Rentzsch.  This includes some interesting new information which has come to light as a result of contact from Michel Reymond as he researched an article on the Australian watchmaker, John Forrester.  Forrester emigrated from England in 1837 and set-up in business in Sydney the following year.  In an advertisement he includes the boast, “Twelve years Foreman to Sigismund Rentzsch, Watch Maker to the Queen and Royal Family, St. James Square, London.”  My thanks to Michel and I look forward to seeing his piece on Forrester.  My article, entitled, The Novel Technology of Sigismund Rentzsch, features in the September 2017 issue of Clocks Magazine.

Volume 38, Number 2, (June 2017), of Antiquarian Horology, journal of the Antiquarian Horological Society, includes my new article on Joseph Anthony Berrollas.  Possibly born in the same year as Rentzsch and also an immigrant to nineteenth century England, Berrollas was highly innovative though not very successful in commercial terms.

Both Rentzsch and Berrollas worked on distinctive versions of keyless winding and they are associated with some of the most significant watchmaking names of the early nineteenth century: Rentzsch employed a young Peter Ingold and Berrollas worked with the London retailer, Viner, and the leading Liverpool makers, Robert Roskell and Peter Litherland.

Here are examples of Continental craftsmen who were instrumental in providing a dynamic within English watchmaking whilst the Trade’s very future was so intensely threatened by the cheap products being imported from Switzerland and France. 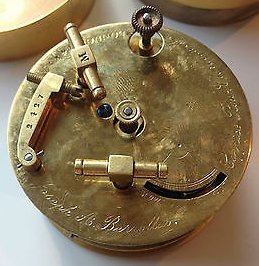 Berrollas Alarm Movement, courtesy of Worthpoint
Posted by davy26 at 05:06