My aesthetic tastes remain greatly influenced by my boyhood experiences of the 1950s.  There was a cosiness to illustrators’ imagination of space travel, and the ‘look’ of rocket ships, spacesuits/helmets in the Eagle’s Dan Dare strip is still one I enjoy.  Science fiction themes were frequently encountered, very impressively so in the styling of American –and eventually, if in a rather diluted form – English cars.  Such things also began to feature as subject matter in the new Pop Art that emerged as the next decade was approached.  But while these things looked to the future, something from the recent past also loomed very large: World War II.  Our comics were full of depictions of the conflict and aerial warfare was a particular favourite.  Naturally, as the victors, the Brits were the good guys, the Jerries bad, and the Spitfire was the king of the skies.  The Airfix kit which was to blame for me accidentally squirting polystyrene cement all over a brand new school blazer was of the good old Lancaster – I was very conventional in revering the look and exploits of that great lumbering bomber.

But I was also a bit odd:  secretly, I studied everything I could about the German Luftwaffe.  Although at that stage not contesting the right and wrongs of the war, I was finding nearly all aspects of the Luftwaffe much more charismatic than the RAF versions – the planes, the insignia and badges, the uniforms, etc.  And that is still my take.  I like the menacing look and specification of such machines as the Ju87, the Do17 and the Me262.

And in the realms of horology, the watches issued to German flying personnel are prized collectibles today.  Foremost of the models was that primarily intended for the use of an aircraft’s Observer – usually the mission’s navigator.  Known as the Beobachtungsuhr – often abbreviated to B-Uhr – and specified by the Reichsluftfahrtministerium (Air Ministry), five makers supplied the watches to the Luftwaffe: A Lange & Sohne, IWC, Laco (Lacher & Co), Stowa and Wempe.  Their brief was to build instruments with a case diameter of 55mm, chronometer-quality movement with a Breguet type balance spring, a hackable seconds hand, a crown with enough protrusion to allow a glove hand to wind it, and a strap allowing wear over the sleeve of flight clothing.  The makers met the basic functional requirements by using modified variants of their pocket watch movements.

The best of the makers is A Lange & Sohne, then and now considered supreme amongst the manufacturing houses located in the German town of Glashutte.  The firm utilised its 48/1 movement for timepieces made between September 1940 and April 1945 for the Luftwaffe and the Kriegsmarine.  The Luft B-Uhr had two iterations – initially with a very simple dial (Type A), and, from 1942, with a more distinctive layout featuring a small, inner, concentric hours track (Type B):

The earlier, Type A, is today the less easy to find.  For both versions it is possible that data on the rear cover (inner face) reflects the fact that L&S sometimes lacked the capacity to assemble the complete timepiece.  As a result one of the following list of makers may appear in the Hersteller field: Huber (Munich), Felsing (Berlin), (Schieron) Stuttgart, Schätzle & Tschudin (Pforzheim), Wempe (Hamburg).

Whilst there is general similarity of appearance between the watches produced by the five manufacturers, some subtle differences are to be seen in terms of the crowns, hands and dial numerals – comparison of the Type A versions made by IWC and Stowa, as below, (left, and right, respectively), illustrate this – especially notable is the style in which the numbers 6 and 9 are rendered on the IWC: 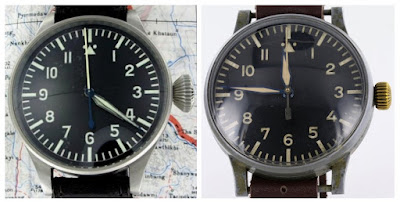 The later, Type B, versions show similar small detail variances.  Here, below, left to right, are those by Laco, Stowa and Wempe:

Of these the most rare is the Stowa – on the company’s contemporary web-site it is stated that total production may have been as little as 42 pieces!

And here are the four movements not already shown, left to right: IWC; Laco; Wempe; Stowa

The stainless steel cases were often finished in grey paint/lacquer and the Reichsluftfahrtministerium reference number, FL 23883 was commonly stamped into the side of the case at the 9 o’clock position.  The serial number (Werk nr.) was stamped into the outer face of the rear cover.

These watches did not remain in the possession of the Luftwaffe flyers – they were issued to them, mission by mission, to be returned on safe arrival back at base.

An impressive watch by virtue of the clarity of the dial layouts and the case size. In recent times there has been enough interest for all the original manufacturing houses/brand names, excepting A Lange & Sohne, to be offering ‘re-interpretations’ (of both the A and B Types) some of which look very much like the originals, but which are somewhat smaller in overall dimensions.
Posted by davy26 at 11:44