Peter Birchall was born in 1799.  It is thought that his parents were William and Ellen, then living in Widnes.  A record exists of the marriage of William Birchall to Ellen Yates at Prescot in September 1789.  There were multiple associations of the Birchall name with watch and clock making in North West England in the late eighteenth and early nineteenth centuries.  According to Britten’s, George Birchall was a Warrington watchmaker, c. 1793-1820, and he may have been the junior partner in a firm, Birchall & Son, 1770. Ed. Baillie, Ilbert and Clutton, Britten’s Old Clocks & Watches and their Makers, (London: Bloomsbury Books)  There was a William born in 1749 who died in 1820, but his sons were named William and Steven.  Another ‘possible William,’ a watchmaker of Wellington Street, St Lukes, died in 1842, but, again, a son named Peter does not appear in his will.One of the sons, James, also a watchmaker, committed suicide in February 1847  Holden’s Directory for 1802 lists a William Birchall, watchmaker, at 11 Kirby Street, Hatton Garden.  The location, Burton Crescent, a little to the east of Clerkenwell, near St Pancras, is also associated with the Birchall name in the 1820s.

There is no record of an apprenticeship having been served by Peter, and it is likely that he was trained by his father.  Whatever the facts of that, his horological ability was such that by 1840 he was confident enough to be submitting two of his chronometers to the Greenwich Trials.  Furthermore, one of them, #281, was good enough to be placed seventh of twenty-eight, and thus his work was out-performing that of such illustrious names as, Pennington, Parkinson & Frodsham and Santiago French.  This chronometer also did better than two made by R & H Molyneaux.  The latter business occupied premises at 30 Southampton Row, which, two years later, were taken over by Birchall and his friend/partner, Henry Appleton.  The 1841 Census shows Henry, then sixty three years old, living at 50, Myddleton Square with Peter, Peter’s wife, Winnie, and their son John, just one year old.  Appleton was renowned for the quality of his work, making him a key employee for several years in the Molyneaux firm.  Given this, and his twenty years seniority, he may well have played the role of a mentor and greatly contributed to the success achieved by Peter in the early Greenwich Trials which are summarised in the table below: 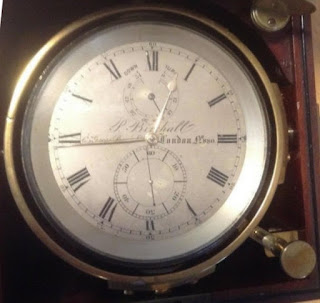 Peter had married Winnie Hitch in 1826.  Their son, William Peter, was born in 1838, and he too would eventually make chronometers which would be proved excellent at Greenwich.  The couple had another son, John, who also worked in the family watchmaking business until his death in 1871.  The family’s means enabled the employment of a servant at each of the addresses recorded by successive censuses: 1851 – 6 Middle Brunswick Terrace; 1861 – 2 Amwell Terrace; 1871 and 1881 – 12a Stonefield Street.Amwell Terrace was merged with Great Percy St in the 1860s and the Birchall’s house became number 65

Age twenty three in 1861, William Peter was described in the Census as a ‘watch maker’s finisher,’ (as was younger brother, John).  At this stage he had already begun to make a reputation of his own, having entered a chronometer - #1 – to the 1860 Greenwich Trial, and this was rated second only to the #642 of his father’s manufacture. The following year his #9 was rated 7th.  In 1862 he was elected to the Council of the Horological Institute.  As a further indication of qualified status, his own listing began to appear in directories in addition to those for his father.  William Peter’s Greenwich Trials results are summarised in the table below: 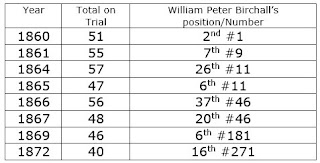 William Peter married Eliza King in April 1864.  They lived with Peter and John at Stonefield Street, the 1871 Census recording them there together with their sons, Peter, Alfred and John.  (Another son, Herbert, was born in 1873.)  William Peter died, age forty, in 1878, from a subdural effusion of the brain, possibly a rare complication of meningitis.  His father, Peter, was considerably longer-lived, dying in October 1885.

Considering the success of both Peter’s and William Peter’s chronometers at the Greenwich Trials, it is notable that they figure only marginally in horological literature, and I have been unable to find any images of extant timepieces of their manufacture other than that of Peter’s #880, as seen above.  I would be very pleased to receive details of any in readers’ possession and/or photographs of them.