‘Clocks’ Magazine in its April 2016 issue has published the first part of my article on Alexander Watkins.  Watkins was making fine chronometers in the mid-nineteenth century, trading from a prestigious London address: 67 Strand.


For students of horology, Watkins is best known for his ‘miniaturised’ chronometer made for the 1851 Great Exhibition.  With its unusually small movement and gold, delicately ornamented case, it is a very fine aesthetic and technical achievement.  However, as I often find, there’s as much interest in a watchmaker’s personal story and the social/commercial setting in which he worked as in his design and manufacturing activities.


So my article, whilst detailing some of Watkins’s watches and movements and his ideas for simpler watches to combat the influx of Swiss timepieces, also explores the circumstances of an attempted murder and the very marked divide in Victorian society between an affluent family and an ‘ordinary’ one. 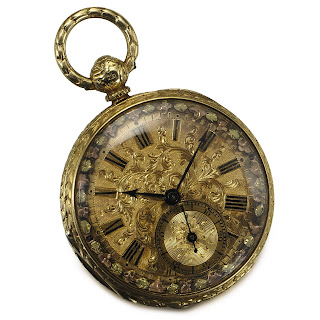 Watkins left a legacy of innovation and quality of work confirmed by the examples held in the collections of The British Museum and The Worshipful Company of Clockmakers.
Posted by davy26 at 07:49