The brothers John and Miles Brockbank were watchmakers active from the mid eighteenth to the early nineteenth centuries.  An excellent, highly detailed account of the business by Dr Alexander Stewart was published in Antiquarian Horology, volume 34, no. 6, December 2015.  Briefly, in summary:


·         The firm was initially noted for its musical Coach Watches


·         John, the dominant partner, became bankrupt in 1783, probably as a result of losses incurred in the hazardous export trade with the Far East


·         In the Earnshaw-Arnold disputed claim for credit for the ‘invention’ of the spring detent escapement, both sides argued that the Brockbanks had been guilty of leaking details of the escapement to their opponent


·         After John’s death in 1806, Miles was briefly in partnership with John’s sons, John E and William, together with James Beck and William Grove


According to Dr Stewart, eleven Coach Watches are known, made between 1780-95, within a number range, 1 – 11 and in varying sizes between 100 and 160mm.  This is number 8, a gilt hour repeater with music played on 6 bells.  It has a cylinder escapement and a lever operated mechanism to stop the centre seconds hand.  Diameter is 132mm.  How elegant is that? 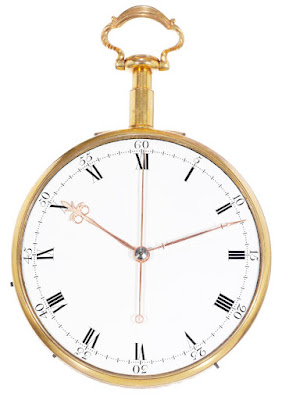 Courtesy of La Cote des Montres
Posted by davy26 at 06:56