This is an updated version of the article I posted here on 26 June 2016.  The update features photographs of the Statters' watch – No 1 – which have kindly been made available to me by Sir George White Bt., F.S.A., Keeper, The Clockmakers' Museum at The Science Museum.

Richard Dover Statter was born in 1825 in Liverpool.  His father, Edward, was a physician and Richard followed in his footsteps, noted on the 1861 Census as a General Practitioner and Member of the College of Surgeons of England.  He is not, however, remembered for any medical advances, but for a 38 page pamphlet promoting the concept of decimalisation.  This was complemented by a ‘decimal’ watch made by his brother, Thomas.


Richard’s approach to decimalisation was in keeping with today’s medical outlook in that it was holistic, as can be gathered from the pamphlet’s title: The Decimal System as a Whole, in its relation to Time, Measure, Weight, Capacity and Money, in Unison with each other.


An attempt to introduce decimalised timekeeping had been made in the wake of the French Revolution.  A revised, ‘Republican Calendar’, in which there were twelve 30 day months, with each month divided by 3 decades, (replacing ‘weeks’), lasted from 1793 to 1805.  The related daily timekeeping model, with each day divided into 10 parts, these parts divided by one hundred, (a decimal minute) and each ‘minute’ by one hundred, (a decimal second), lasted only from 24 November 1793 to 7 April 1795.
The British Museum holds nine examples of decimal pocket watches made in France/Switzerland during the Revolutionary era.  The dials of eight of these are shown in the collage below: 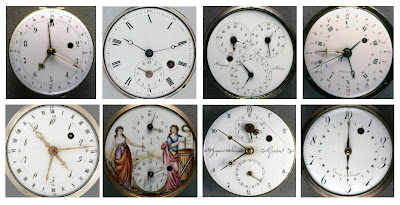 
Whilst the new physical units of measure – metre – litre – gram – became established, the proposed new time metrics did not, primarily because:

·         There was ‘comfort’ for the ordinary person in the old, familiar model and confusion is assimilating the new, especially when so much change was taking place over such a short period of time

However, some half a century later, Statter’s pamphlet sought to resurrect the idea of decimal time and is especially interesting when considered in relation to his brother’s watch.  Thomas is recorded as a watchmaker in the 1861 Census – aged 22, he was still living at home with his mother and father.  The case of his decimal watch is hallmarked for 1862 and is now in the Clockmakers Museum within the Science Museum, London.

The true basis of a universal Decimal system

Courtesy of Sir George White Bt
An alternative dial design – drawn seven years in advance of production of the watch – shown below is reproduced in the Pamphlet: 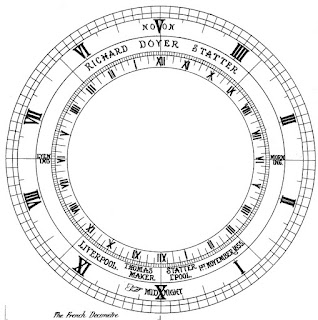 It would seem to be a remarkable piece given its two register functionality and elegance relative to the youthfulness of its maker, (aged just 23).  No other examples – of this decimal timepiece or indeed any other watches signed by him – of Thomas’s work are known to exist, partly accounted for no doubt by his short life – he was dead only 3 years later.  It would also be logical to view this as a prototype – perhaps ‘No. 1’ is the actual movement number.
After the Statters’ time, late in the nineteenth century, the ever-increasing influence of railways and the advent of the electric telegraph gave rise to renewed consideration of decimal time, since it could provide a model for a new global time standard.  Although no practical initiative emerged then, a similar communications revolution occurred as the twentieth century closed, with the establishment and rapid development of the Internet.  Stemming from this, 1998 saw the introduction of Swatch Internet Time, (also known as ‘beat time’).  The objective was to provide a common global time for people communicating over the Internet, from/to anywhere in the world, without the complication of any geographically-related ‘time zones’.  It divides the day into 1000 beats, midday occurring at 500 beats, (@500).  A beat is therefore equal to 1.44 minutes.  A dual function Swatch is shown below: 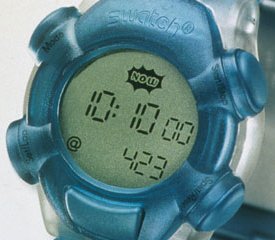 Courtesy Getty Images
And, coming right up to date, Chanson David Watches - http://www.chansondavid.com  - are currently offering a range of watches – called the Comparative - which indicate conventional and decimal time on a single analogue dial layout, where, as illustrated below, the hour hand (green tipped) points to the decimal value, against the outer scale.  This divides the average calendar day into 2 x 10 units is in accordance with the International System of Units (SI).  The conventional time showing in this illustration is 10 hrs 8 mins 24 seconds: 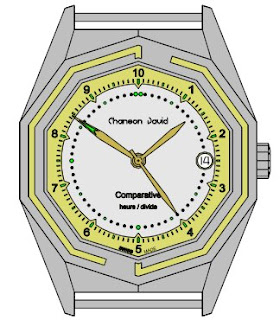