The Bracebridges were watchmakers active in the late eighteenth and throughout the nineteenth centuries.  Traditional horological reference resources – Britten’s , Baillie’s and Loomes – list three makers with this name, but I have identified five, in three generations.

The line begins with Edward.  Britten’s records working dates of 1799–1818, with the address, 8 Red Lion Street, Clerkenwell.  Baillie adds that Edward was in partnership with William Pleace.  There is little more than can be said about Edward.  The earliest possible reference to him is October 1766, when an Edward Bracebridge gave evidence in an Old Bailey trial concerning a larceny in Clerkenwell.  Given the locality and that the profession of a fellow witness, James Upjohn, is given as a watchmaker, it is likely that this is ‘our’ Bracebridge.  Certainly relevant is a Sun Life Insurance record from 1787 which refers to cover for the beer copper of one Alex. Ruff, ‘at Mr Bracebridge’s Watchmaker opp., the small pox hospital in Cold Bath Fields’, (an area close to the Mount Pleasant Royal Mail centre).  The Hospital was demolished and replaced by a prison which opened in 1794.  This institution, incidentally, represents a link to one of Edward’s sons in the early nineteenth century.

I believe Edward had two sons, James and Edward Charles.  James would have been born circa 1788-92 and died circa 1849.  This documentary reference to James is from the Sussex Advertiser, 27 March 1826:

Cornelius Muzzell’s Affairs: Notice is hereby Given, that Cornelius Muzzell, of Horsham, in the county of Sussex, Clock and Silversmith, hath, by indenture bearing date the 5th day of November, 1825, assigned all his Estate and Effects to James Troup, of Cheapside, in the city of London, Silversmith; James Bracebridge of Red Lion Street, Clerkenwell, in the county of Middlesex, Watchmaker and Edward Walker, of Red Lion Street, Clerkenwell aforesaid, Ironmonger, in trust for themselves, and such other Creditors of the said Cornelius Muzzell, as shall, on or before the 5th day of May next, agree to accept the Dividend or Composition arising under the trusts of the said Assignment, in full of their respective debts, - And further Notice is hereby given, that the said Deed of Assignment is left at our Office for the inspection and signature of the Creditors.  Sheppard, Thomas and Lepard.  Cloak Lane, London, 18th March 1826.

Another reference is of much greater horological significance.  When Pierre-Frederick Ingold attempted to set up industrialised watch production in 1842 he encountered staunch opposition from London’s traditional watchmaking trade.  Rather than seeing Ingold’s British Watch & Clock Company as an important element in combating the insurgent Swiss and American industries, the Trade perceived it as a further threat and petitioned Parliament for legislation to deny Ingold’s right to raise capital for the new company.

James took a prominent part in a meeting of the Clockmakers, as reported in Lloyd’s Weekly Newspaper, 2 April 1843.  The previous Tuesday over 2,000 tradespeople met at the Crown and Anchor, “to take into consideration the best means to be adopted in reference to a bill now lying before Parliament to incorporate a new company calling themselves The British Watch & Clock-making Company . . “  He opened the meeting and seconded the resolution, which was to oppose the establishment of the proposed new company – this posture being maintained and Ingold’s initiative eventually defeated.

Edward Charles was born circa 1790, evidenced by a record of admission to St Paul’s School in 1800, his age being shown as ten.  At the age of twenty Edward Charles attained the Freedom of London, a privilege passed on to him by convention as a result of his father’s entitlement to the honour.

Edward Charles’s name appears on a list of jurors for a very significant London trial in 1820.  His suitability to sit on the jury was successfully challenged by the Crown and he therefore took no part in the proceedings.  However, this trial, (of the ‘Cato Street conspirators’), is of general interest as it resulted in the last instance of men found guilty of treason being subject to an execution in which they were hanged and beheaded, (a diminution of the ‘hanged, drawn and quartered’ punishment which had originated in the reign of Henry III).  They had been confined in the Cold Bath prison mentioned above in connection with Edward.

That Edward Charles – in partnership with brother James - was occupying the familiar Red Lion Street premises is confirmed by an entry in the 1825 issue of Pigot’s Directory.  That he was prospering is perhaps suggested by his having his – and his wife, Philippa’s – portrait painted in 1839 by John Samuel Agar, an artist of moderate repute and for a time President of the Society of Engravers.

The business, styled as Edward Charles Bracebridge & Co is evident in various directories with the dates 1851-81.  The primary address remained 8 Red Lion Street, in 1862 a shop was trading at 119 New Bond Street, managed by Charles Roe.  The family residence was 6 Barnsbury Villas, Liverpool Road, Islington.

Edward Charles and Philippa had two sons, James (James II), circa 1823-92, and Edward Gilbert, 1822-99.  James II proved to be the more high profile outside the family business itself – he served as Treasurer to the Watch and Clockmakers Benevolent Institute and was this body’s representative at the funeral of Charles Frodsham in 1871.

James himself eventually found his health failing and in the 1 August 1891 issue of The Watchmaker, Jeweller and Silversmith it was reported:

. . . Mr. James Bracebridge is retiring from the business which he has carried on for many years as watch manufacturer in Clerkenwell, under the style of E. C. Bracebridge and Co.  Mr. Bracebridge has appointed his nephew, Mr. F. Bracebridge Mills, to settle his affairs. There is, we believe, some likelihood that Mr. T. D. Wright, who for many years has held the post of manager to Mr. Bracebridge, will continue the business, and in this event there is no doubt that the reputation the firm has long enjoyed will be fully maintained in Mr. Wright's hands.

Edward Gilbert’s role in the business is not clear.  One of the few references to him is a record of a donation of £10.10s. to the North London Consumption Hospital in 1896, so one might conclude that he, or a close family member suffered with this condition which was all too prevalent in late nineteenth century London.

Thomas Wright formed a partnership with William Craighead to carry on the business at Red Lion Street from 1891.  Wright became very well known in wider horological circles and it was his proposal for the format of British Summer Time clocks adjustment that we use to this day.

I have traced eleven extant Bracebridge watches.  Attribution to specific members of the family is difficult because of some missing movement numbers, some re-cases and un hallmarked cases.  At least three sets of 4 digit movement numbers seem to have been used, with an apparently relatively consistent range between 1823 - #5882 and 1850 - #8935.  A five digit #38931 is dated to 1865 and another, #12741, is in a silver case hallmarked for 1892.

Perhaps the most attractive is #5882, a repeater in 18ct Gold Case made by Louis Comtesse: 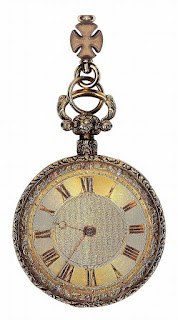 
The British Museum holds a Bracebridge movement.  Circa1865, this features a Savage-two-pin lever escapement and utilises a keyless winding mechanism: 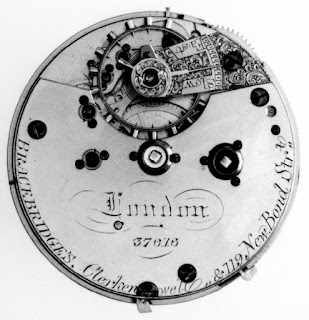