In researching watchmakers of the Georgian and early Victorian era, threads of information often come to a shuddering halt, especially because of the lack/non-comprehensiveness of information in publicly accessible records, censuses for example.  As a result I sometimes discover horological ‘stories’ in which something previously unknown can be inferred, but not substantiated.  This of course is true for anyone researching and writing about any historical subject.

Here I thought I’d let my imagination run free and, rather than avoid speculation, positively indulge in it.  The resulting account satisfies my preference for a narrative in which ‘human interest’ calls the tune rather than certainty of fact.  Primarily I hope it will engage readers’ keen interest, but I’d also stress my willingness to accept informed feedback: if any of my deductions/inferences are known to be incorrect, I’m very ready to edit and update the ‘story’.

My first knowledge of Charles Hanson was an entry in an excellent and quirky book, ‘The Watch Collection of Stanley H Burton; Warts and all’.  On pages 110 – 111 a watch is illustrated and described: 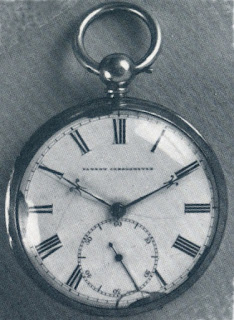 Charles Hanson was born in Huddersfield in 1801.  With his wife, Mary Ann, Charles had three sons, William, Alfred and Charles.  The family lived at Buxton Road in the 1840s, Chapel Hill in the 1850/60s and Stables Street subsequently.  Alfred – ‘Fred’ – followed his father’s trade, working as a watchmaker.  Charles died in 1880.

Directory listings for Charles’s Huddersfield clock and watchmaking business include Cloth Hall Street (1830) and 100 Northgate (1834/5).  Such was Hanson's ambition and success that he also maintained premises in High Holborn, London, 1835-42.  Later, in the early 1860s, Hanson was in partnership with Theophilus Murcott at 68 Haymarket, London.

Hanson’s main claim to horological eminence stems from his acquisition of three patents in 1845, 1859 and 1875.  The first of these, #10876, has three elements, summarised as follows: 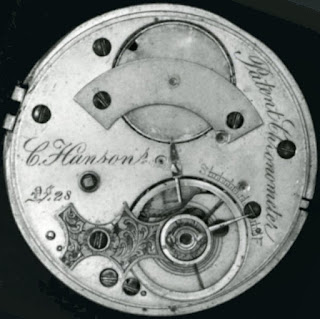 Shown above is an example of Hanson’s pivoted detent in the collection of The British Museum.  This is an uncased movement, numbered 28 and dated to 1839-45; but note that within the same catalogue description a later date of circa 1860 is attributed by Anthony Randall; he also relates this movement to patent # 1950, (27 August 1859).  In the introduction to this patent, Hanson says, (with some tautology):

This invention is intended to simplify the chronometer escapement of a watch, and to dispense with the two springs usually employed at that part of the movement.  The Invention consists in the employment of a pivoted detent acting upon the escape wheel, which is made elastic in such a manner and with such power as to dispense with the use of the two springs ordinarily employed as above mentioned in chronometers of the usual construction.

The patent is illustrated with the diagram below: 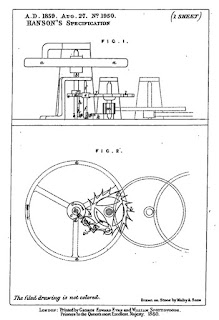 The third horological patent, registered in the United States in 1875, was concerned with a means of equalising mainspring power by means alternative to the more troublesome fusee.