Born in Braunschweig (Brunswick), Lower Saxony, in 1799, Henry Delolme was the youngest son of horologist Antoine Nicolas Delolme. The name Delolme is associated primarily with that part of south west France abutting the Swiss watchmaking region centred on Geneva.  It is logical to conclude that the Delolme family was of French origin but relocated progressively for reasons of trade during the seventeenth/eighteenth centuries to Switzerland and subsequently to the central German state.

Antoine gained a reputation for high quality work and was appointed Clockmaker to the Braunschweig Court in the 1780s.  The City experienced considerable turmoil during the early decades of the nineteenth century, being occupied by the French as a Napoleonic conquest in 1806.  Subsequently, the Congress of Vienna established a Duchy of Braunschweig, with the City as its capital.  The regime was notably illiberal, (resulting in 1830 in an uprising and the Duke’s (Charles) replacement by his brother William,) and this was no doubt the main reason why the Delolme family (and others of their like) emigrated around 1810.  Antoine’s later clocks are signed Delolme, Paris, whilst by circa 1827 Henry had set up business in London.  It is likely that Henry formed a partiality for the French in deference to his family’s origins and his own experience during his brief period as a teenager residing in Paris, perhaps as their capital offered a welcoming milieu much in contrast with the repressions and conflicts he had observed in the city of his birth.   The earliest documentary evidence for Henry’s residence in England has been found in the archive (Volume 515) of the insurers, Sun Life, with the entry:

The next extant record results from his marriage in 1829 to Amelia Lebarthe.  A newspaper report of the theft of watches from Delolme refers to the Business’s location at Rathbone Place but does not clarify the apparent anomaly regarding the building’s number – no.23 in the insurance record, but always no.48 elsewhere.

The 1842 edition of Robson’s London Directory features the listing: 48 Rathbone Place – Henry Delolme, watchmaker and importer of Parisian clocks and Musical Boxes and Importers of Geneva Watch Tools and Materials.  Throughout that decade Delolme developed the quality and range of his products.  Notably, he began to offer Marine Chronometers, for which at that time there was ready and increasing demand in accordance with the navigational needs of an expanding shipping industry driven by global trading.  Thus, by 1851, Delolme’s exhibits in the Great Exhibition included, in addition to seven gold Pocket Watches, two Marine Chronometers.  The latter were based on rough movements sourced from the Prescot (Lancashire) manufactories.  Probably informed by his Continental heritage, he was differentiating his Pocket Watches from those of his more traditional English competitors by seeking to make them as unbulky as possible.  In reviewing his exhibits, a newspaper report observed:

Mr. Delom (sic), of 48 Rathbone-place, exhibits a handsome collection of watches, containing many improvements in construction, the result of his long scientific experience.  By dispensing with the fusee he obtains more room for the other works, and is thus enabled to comply with the present taste for flat watches without any sacrifice of strength or durability.  The duty of the fusee in regulating the inequality of the mainspring is performed by an ingenious contrivance which he very learnedly calls an ‘isochrone pendulum spring’ – this sonorous epithet being the only part of his work which is not entirely of English manufacture.

(Note:  There’s some ‘marketing-speak at play here in order to suggest novelty and a unique feature: after all, as long ago as 1782, John Arnold’s patent, #1328, was summarised as being applicable to, ‘Escapement and balance, to compensate the effects of heat and cold in pocket-chronometers or watches, also for incurvating the two ends of the helical spring, to render the expansion and contraction of the spring concentric with the centre of the balance.’)


Regarding his Chronometers, Delolme was bracketed with some of the most renowned English makers:

In marine and pocket chronometers we have a very creditable display of first-rate workmanship . . . we may mention the well known names of Arnold, Frodsham, Barraud, Dent, Delolme, Gowland. (Morning Chronicle, 9 May 1851)

Around this date Delolme adopted an image of a Marine Chronometer for his advertisement: 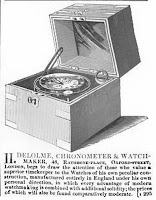 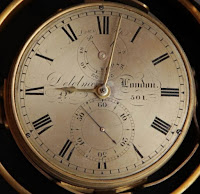 It has a 2-day movement with Earnshaw-type spring detent escapement.  Numbered 501, it is probable that this is an example of Delolme’s output considerably prior to his participation in the Great Exhibition.  The highest number extant is 1002.  In Chronometer Makers of the World, Tony Mercer indicates a known movement number of 2248 with date attribution of 1899, (9 years after Henry’s death).  He also records examples in a movement number range of 96 to 1355.  Mercer also wrote of Delolme, intriguingly, ‘Honest and straightforward but lost all his money; also, ‘George Oram, chronometer maker, collected funds to his modest requirements.’  There is, however, no record of a formal business partnership involving Delolme and Oram, his contemporary and proprietor of a commercially successful horological business based at Wilmington Square, Clerkenwell.  But whether or not Delolme made the most financially of his talents, the Business was substantial enough to support the employment of four watchmakers.

And beyond his own enterprise he had a care and concern for people employed in the Trade.  With the difficulties English watchmakers experienced in the mid-nineteenth century, especially as a result of loss of market share consequent on the popularity of imported products from Switzerland and America, came a desire by the more successful ‘names’ to alleviate hardship in the Trade’s workforce.  In particular there was a need for accommodation for elderly practitioners who could no longer work and/or afford to rent a home or premises.  As a partial solution, a community of alms houses in New Southgate, known as the Clock and Watch Maker’s Asylum was established in 1857.  Henry was a noted, prominent attender at the Asylum’s inaugural dinner held at the Albion Tavern, Aldersgate Street.

That Delolme had a finely developed social conscience is further indicated by his association with the French Protestant Evangelical Church.  Henry was nominated as a trustee in 1867. He subsequently took on the role of Treasurer to safeguard the funds sought by charitable appeals, an example of which being:


Mission of the French Protestant Evangelical Church in Bayswater:  This mission, by means of which large numbers of foreigners are every year in many ways benefitted, irrespective of creed or nationality, stands in deep need of aid at this present time.  The mission supports a deaconess and a Bible-woman to visit among the foreign population, and administer to their bodily as well as their higher wants.  This mission is without any endowment whatever.

The success of the Great Exhibition inspired further similar international fairs elsewhere in mid-nineteenth century America and Europe.  It also left an appetite for a repeat in London and the realisation of this in 1862 was partly funded by profits from the 1851 event.  Delolme’s Establishment status was affirmed by his appointment to the Exhibition’s horological department planning committee along with elite clockmakers Cole, Webster, Bennett and Upjohn, meeting at the organising Society of Arts’ premises in the Adelphi in August 1861.

The Exhibition opened in Kensington in May of the following year with Delolme again contributing an impressive range of watches and clocks, reviewed as follows:

Mr Delolme exhibits many specimens, including marine chronometers, one of them with metallic mechanical thermometer; astronomical regulator, in plate-glass and ormolu case of entirely new design, with gravity escapement; the pendulum is suspended on friction rollers.  There are also transparent eight-day clocks, for night and day, with invisible movements of novel construction, and lighted by the usual night light; a watch, with metallic thermometer; and a first-class English independent seconds watch, with one train only, being on the principle of the remontoir escapement.

(The ‘remontoir’ solution to the problem of varying input force to the balance is succinctly summarized in Hodinkee’s Watch 101, https://www.hodinkee.com/watch101/remontoir-degalite.  Watch 101 is also instructive in regard to the tourbillon feature seen in the chronometer illustrated below.)

Delolme received a medal in recognition of the excellence of his exhibits.

An example of Delolme’s later production appeared in the Dr Crott 91 Auction sales catalogue, May 2015.  This is attributed with number 8820 and dated to circa1875:

The specification is impressive, summarised in the catalogue:

Henry continued at the helm of the Business into his eighties – still recorded as a watchmaker (master), not a retired watchmaker – in the 1881 Census.  As mentioned earlier, son Charles, age 44, is on the same census return and described as a watchmaker.  There is no evidence to suggest that he assumed control of the Business before Henry’s death in 1890.  Equally, with the exception of Mercer’s citing of number 2248/1899, it does not appear that the Delolme name continued to appear on watches made after that date.  So Henry’s brand did not substantially survive him, but during his lifetime it was one which represented technical quality and aesthetic excellence.