James Davidson Pyott was born on 10 August 1825.  His eighteen year old father, also James, was a watchmaker, born in Dundee.  The 1841 Census found them at Ramsgate Street in Stockton-on-Tees, and it appears that son was apprenticed to father, perhaps informally.  Ten years later the family had relocated to London, living in Long Acre, near Covent Garden.

An advertisement in the Clerkenwell News, 6 February 1858, is intriguing in that it may have been placed by either man.  Young James’s life and work is the much more completely documented, but he was never associated with this address, so it is perhaps likely that this was his father’s pitch for work:

Fig.1. © The British Library Board

The 1871 Census recorded the Pyott family at 9 Pentonville Road – by now James and Alice had three daughters and one son, Arthur.  As to the business, from the following year Pyott’s trading address was 7 Jamaica Terrace, West India Dock Road.  As seen in the advertisement reproduced below, James took the premises over from Thomas Barclay: 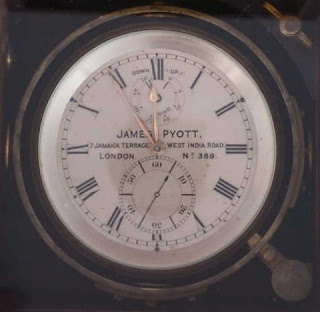 Through the 1870s and to the turn of the century, Pyott was listed in directories in this road, usually at number 74, as seen on this trade label: 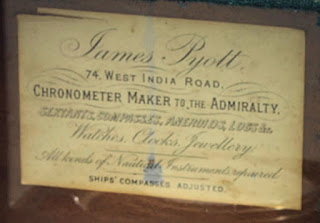 Pyott first submitted a chronometer to the annual Greenwich Trials in 1875, placing 34th (of 49) with movement #395.  Three years later he achieved the high distinction of coming First with #478.  Conversely, in 1894 and 1902, a Pyott chronometer was rated Last.  He entered instruments for the Trials most years between 1875 and 1904, with results summarised in the table below:

Whilst most makers sought to capitalise commercially by referring to Trials results and the Maker to the Admiralty boast, Pyott apparently did not, since he mainly made movements for other ‘makers’ and retailers, his name/signature very rarely appearing on dials/movement plates.  Tony Mercer referred to this in letters submitted to the Antiquarian Horology Journal:

Another group were the dedicated craftsmen/makers who seldom, if ever, put their own name on the dial but made for other, more commercially minded makers, such names as Lawson, J. Smith, E. Sills, Pyott, Hammersely and Cogden are but a few.Antiquarian Horology, volume 18, no.2, p95

(Concerning a thousand chronometers sold by Kelvin Bottomley & Baird, (and related firms)) . . .they were made by Kullberg, Poole, Pyott, Mercer, Johannson, Usher & Cole, Dodd and Gardener.Antiquarian Horology, volume 9, no.6, p100

In the 1880-90s Pyott’s business acumen was however evident in his decision to widen his ‘stock-in-trade’ beyond timepieces, embracing the market for marine-related instruments – Sotheby’s, in 2002, for instance, selling a sextant attributed to him.  And the barometer, shown below, bears his West India Dock Road address: 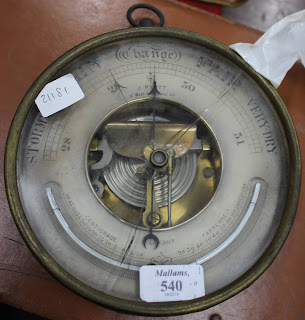 Pyott became interested in local government and was nominated to stand for election in the South Ward of Limehouse in 1897.  Financially secure, he was able to begin his retirement in the affluent milieu of Mayfair, living with Emma and Arthur in Balderton Street.  He might perhaps had hoped that Arthur would carry on the watchmaking business, but his son is recorded in the 1901 Census as an actor, and his wife, Nellie, an actress.

James Pyott died a little short of his ninetieth birthday, in April, 1915.  He was by then at Keith Lodge, Allknutts Estate, Epping.  Cause of death was given as senile dementia.