William Carpenter was at work as a London Clock and Watch Maker in the later eighteenth century.  He became free of the Clockmakers Company in 1781.  Roger Smith has suggested that Carpenter lived from circa 1727-18031.  However, other sources indicate that he was working until at least 18182.   From the same sources his premises are given as:


Soho was a district in which a considerable number of French Huguenot refugee horologists/jewellers settled in the late seventeenth century3 and Roger Smith speculated that the Carpenter family name was perhaps originally, Charpentier.  Today Soho Square is the location of Christ Church - the only surviving Huguenot church in London.


A reason to speculate that Carpenter may have had a French heritage is his frequent use of the Coach Watch ‘format’ and its associated continental characteristic of decorative complexity.  Reviewing 50 timepieces of this type recently catalogued on the Antiquorum site, the following analysis resulted:


Extant Coach Watches are not uncommon, especially as made in the period, 1740 – 1810, but examples can be seen from as early as the seventeenth century.  Intended to be hung in a prominent place within a coach or carriage, allowing all the passengers to readily see the time, these watches were typically in the size (diameter) range, 70mm-120mm.  As a means of distinguishing the operator’s firm (brand), with a connotation of character and quality, Coach Watches tended to complicated – often with 4 or 5 sub dials and repeating/alarm functions – and highly decorative, with extensive case engraving and enamelling/paste work.


In cataloguing and analysing Carpenter’s production – here I am addressing watchmaking only, not clock manufacture – a helpful aspect is what appears to be an orderly, consistent run of movement numbers.  The lowest is 4040 and the highest 6074.  From this range I would conclude that Carpenter’s rate of manufacture never exceeded 100 per year, and, given the high degree of movement complication he favoured, was perhaps in some years considerably less.


More of a challenge is the job of dating the watches.  Since the great majority of extant timepieces are housed in brass-based cases, hallmarking on a Carpenter watch is a rarity.  Cataloguers seem to apply ‘circa 1780’, ‘circa 1790’ and ‘circa 1795’ fairly indiscriminately.


An advanced degree of complication is to be seen with the lower movement numbers – five metrics being evident with movement numbers, 4040, 4043 and 4053, seen left – right in the photographs below.  These three all have an outer, concentric minute track, with Arabic numerals at 5 minute intervals.  The four subsidiary dials are as follows:  at 12.00, hours, with Roman numerals; at 3.00, seconds, with Arabic numerals at 5 second intervals; at 6.00, jump ¼ seconds4; at 9.00, moon age.


The cases of these ‘early’ watches feature engraved foliage and floral decoration.  On 4040 and 4043 the bezels are decorated with paste stones.  All three are approximately 80mm in diameter.  In each case both movement and dust cap are signed Wm Carpenter, London. 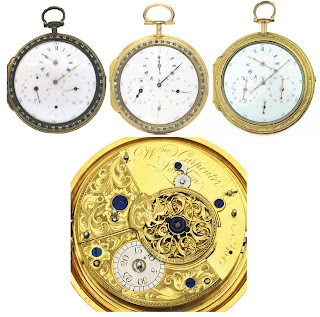 
For comparison, here below is a Coach Watch of similar complexity by James Cox.  The functionality is very much the same, except that one fifth jump seconds are measured as opposed to the quarters on the Carpenter versions.  Cox was primarily a goldsmith, but became a notable trade entrepreneur, developing a substantial horological goods business in the Far East markets.  He twice shrugged off bankruptcy and established a team of craftsmen to make clocks, watches and items of jewellery, marketed under his name.  This gilt metal case is big – 125mm - and is covered with shagreen skin.  It dates from circa 1775, the movement number being 8042: 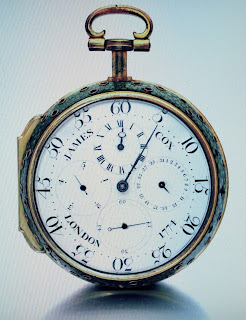 
The case style seen for Carpenter’s early Coach Watches is evident in this Clock Watch, to which he assigned number, 4560.  From the dial it might be thought that it is much simpler.  However, features include Quarter (bell) Strike and stoppable Centre Seconds.  It is significantly smaller at 54mm diameter: 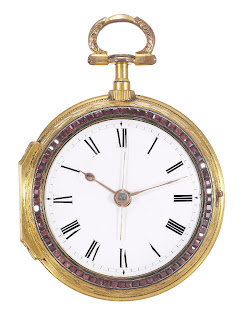 
Probably of very similar date is movement number 4580 which incorporates an alarm.  The dial is more like the early examples, but there are three as opposed to four sub-dials – indicating hours, seconds and alarm set time. 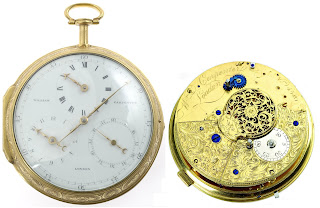 
In a further variation of the Coach Watch format, Carpenter made use of a large aperture in the dial in order to display the balance, which was accordingly treated to a decorative gilt finish.  Examples are movement numbers, 4633 and 4644.  These are a little smaller than the earliest Carpenter Coach Watches, being 70mm/74mm in diameter.  Both have pair cases engraved with foliar forms and have enamel polychromatic paintings on their backs.  There is no concentric index, but functions/sub-dials, clockwise from the 12.00 position are: hours, (Roman numerals); minutes, (Arabic numerals at 5 minute intervals); seconds, (Arabic numerals at 10 second intervals); jump quarter seconds; regulation; moon age.  A band of alternating-colour paste stones surrounds the balance-sight aperture, the stones being red/green in 4633 and red/blue in 4644. 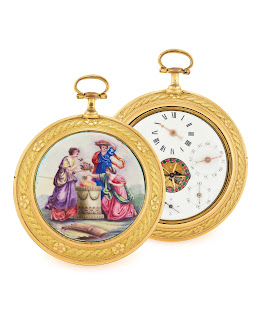 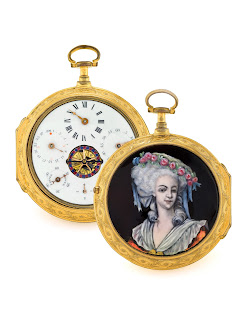 
Details of extant watches are given in the table below.  In this I have indicated the date attributed by the various source cataloguers – inconsistencies are immediately apparent as the watches are listed in movement number order.

From these examples it is evident that Carpenter was a stylish, highly skilled watchmaker.  His clocks also were complicated, highly decorative and, accordingly, successful in the Indian, Turkish and Chinese export markets.  The V & A Museum in London holds one of his musical automaton clocks which can be seen in action in a short video found at: http://www.vam.ac.uk/content/articles/v/video-a-musical-automaton-clock/ .


4.            For a better understanding of the jump seconds function, the Horological Journal featured an excellent article in the October 2015 issue, ‘Independent-Train Watches and Jump Quarter-Seconds’, by Philip W. Kuchel.