I am starting to research the eighteenth century English maker, William Carpenter.  His work features some wonderful exercises in complication, including ornate musical clocks and four dial watches; as usual I will be focussing on the watches.


I’m having some difficulty with Carpenter’s biographical details.  Although lifespan dates are given above, Baillie and other sources suggest that he was working until at least 1817.
If anyone has any information about Carpenter I’d very grateful if you’d advise it to me.


Meanwhile, to indicate why Carpenter is well worth close study, here is an example of his output: 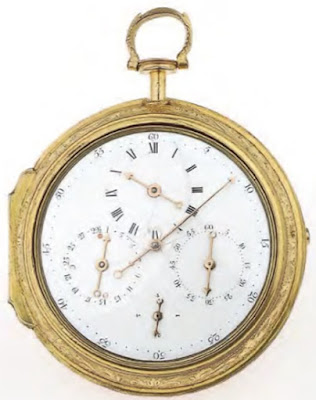 Courtesy of Auktionen Dr Crott
This timepiece, #4053, circa 1795, would be classified as a ‘coach watch’, being 82mm in diameter.  Like much of his production, it was made for the Chinese market – one eager for complication and ornate decoration.  In effect this watch has five dials, measuring: Hours, minutes, seconds, jump ¼ seconds and moon age.  For a better understanding of the jump seconds function, the Horological Journal featured an excellent article in the October 2015 issue, ‘Independent-Train Watches and Jump Quarter-Seconds’, by Philip W. Kuchel.
Posted by davy26 at 08:04