Having been so impressed by the Coach Watches of William Carpenter, I’m going to create a series of short posts each with details of such a watch/watches and maker.  The first is a product of Francis Perigal, in collaboration with Markwick Markham, the latter name lending considerable clout for the eastern export markets.  Baillie lists no less than twelve members of the Huguenot Perigal family active in the London watchmaking trade from the beginning of the eighteenth century through to 1840.


Five of the watchmaking Perigals were named Francis, so some confusions of dates/products must be expected.  I believe this Francis (1742-1824), had premises at 57 Bond Street and achieved the status, Watchmaker to the King.


This Coach Watch is numbered 15407 and likely to be circa 1820.  It features a silver triple case and is a repeater with quarter striking, Petite Sonnerie pattern.  Diameter is 123mm: 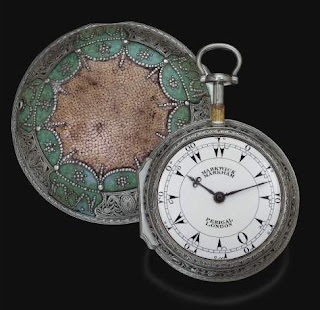 
This one is earlier - circa 1780 - again triple-cased and quarter striking, but also with calendar and alarm; dial with Ottoman numerals.  Diameter is 181mm: 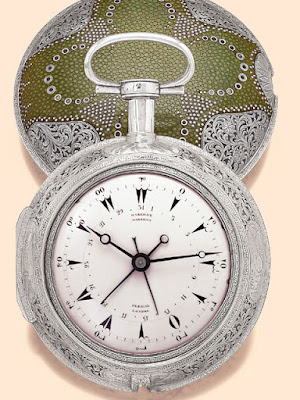 Courtesy of Antiquorum
Posted by davy26 at 06:47