That Arm Must be Tired by Now

I have waited over 60 years to become an owner of one of these, so its arrival in the post today was quite an event: 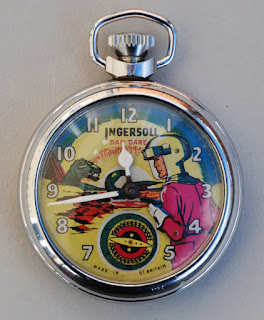 It reminded me of my excitement when the new issue of the Eagle comic arrived weekly.  In modern parlance, the production values of the Eagle were astonishing in the relatively austere early Fifties.  The use of colour and illustration detail were ground-breaking.


Dan Dare, on the front cover, was certainly the star turn and amongst the character-branded merchandise, the watch was our Holy Grail of the times.  The sub seconds dial and automaton arm/ray gun added considerable sophistication.
My new acquisition is the earlier version, made in 1953.  The Eagle publishers decided that the Ingersoll dial script was too assertive and ordered a replacement variant where ‘Dan Dare’ was substituted for the maker’s name and ‘Made in Great Britain’ was removed.


I now need to find an original box – probably much rarer than the watch itself, so I’ve started saving!
© Trustees of the British Museum
Posted by davy26 at 05:25