The original draft of my article on John Grant of Fleet Street, published in the February 2016 issue of Clocks Magazine, included some extensive narrative about and depiction of Benjamin Webb’s Patent Polar Watches.  During the editing process a good deal of this was removed, mainly because of some difficulties experienced with the copyright holders for the images I had intended to use for illustrative purposes.  Subsequently the issue has been resolved – not just in regard to the specific material, but as a broad principle.  As a matter of policy, the Museum of the History of Science, Oxford has now decided to allow images available on its website to be freely downloadable for use by academic publications with a low print-run.


John Grant’s business was distinguished by an innovative approach both to manufacturing and retailing.  This latter aspect was well evidenced by the offering of Webb’s Polar Watches.  These dual-purpose instruments are certainly interesting in their own right.  They are an example of a favourite ‘branch’ of watchmaking of mine: multi-functionality – a trend that emerged in the late 18th/early 19th centuries, including Coach Watches – with four or five time metrics – Chronographs, and such as the Watch-Pedometers of Ralph Gout and Polar Watches of Benjamin Webb.


I’d like to reproduce here the ‘look’ of the Polar Watches and the related promotional material as I believe it represents the period extremely well: 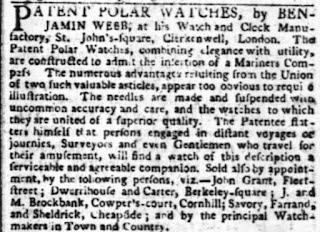 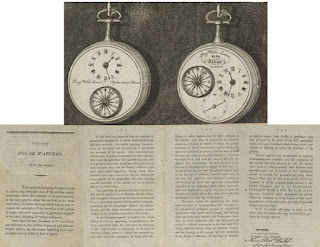 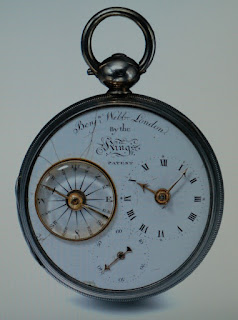 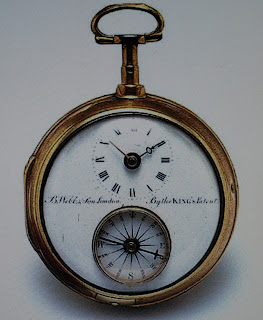 Courtesy of Sotheby’s
#45 can be seen on the Antiquorum website.  It is very similar to #81.
#123 – movement only, is held at The British Museum and further examples are in the Worshipful Company of Clockmakers’ collection, (#129) and York Castle Museum.  According to Paul Tuck, in his ‘Horology Under the Hammer’, Antiquarian Horology, Vol 21, #2, 1993, the Polar Watch featured a Duplex escapement.
Although Webb liked to feature, ‘The King’s Patent’, prominently, it was not his own.  The reference is to Patent #2280, December 1798, in the name of John Randall Peckham of Bermondsey.
Webb was amongst the Makers quoted in a 1798 Parliamentary Report on the petitions for repeal of the Duties on Clocks and Watches Act 1797.  Webb summarized his loss of business with the following data:


Webb stated that he had been in business for 27 years and had never before seen such a sudden fluctuation in business volume.  He added that it had become very common to substitute silver/base metal for gold in the making of cases.


Evidence from John Grant was also heard in regard to the Act.
The Polar Watches are usually ascribed to the dates, circa 1800-05, and evidence of Webb’s subsequent prosperity is lacking.  The British Museum notes him as active up to 1811.  Although the trading title, Benjamin Webb & Son was in use at the time of the marketing of the Polar Watches, little is known about his offspring, James.  Baillie lists him: London (St John’s Sq) 1799.  There is also a Robert with St John’s Sq given as location, and dates 1815-25.
Although the Polar Watch concept and its marketability were unproven, just in case it was about to become highly sought after, the commercially vigilant Swiss were not slow to create similar – though less elegant – similar instruments, this for example: 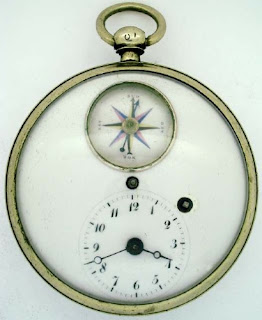 Courtesy Cogs & Pieces
The theoretical ‘need’ for Webb’s creation was probably not sustained by practical experience.  The carrying of a compass would not have been especially onerous for a mariner or explorer, used to working with one in any event.  Equally, a relatively small compass housed in tandem with a timepiece would be unlikely to offer the accuracy/stability of a stand-alone instrument.  No doubt there was an initial talking-point value whereby the flourishing of his Polar Watch emphasised the trendiness of a young Gentleman about Town.  However, as the new century got into its stride the underlying quality and elegance of form implied by the term ‘Chronometer’ probably soon attracted the fashion-conscious watch buyer’s attention, at the expense of a ‘novelty’ such as Webb’s.