A Man of Contradictions

In my post about John Walker (25 November 2015) I mentioned Milner & Son’s ‘thief-proof’ safes.  Now, from the watchmaker’s side of the fence I’d like to introduce you to the ‘Unstealable Watch’!  This was the ‘invention’ of Sir John Bennett, a Victorian maker/retailer with a very twenty-first century approach to marketing.  Bennett’s advertisement in The Times, 24 May 1858 reads:


Bennetts Unstealable Watches- In consequence of the number of valuable WATCHES stolen from the person by snapping off the pendant ring J BENNETT of 65 Cheapside, is prepared to apply to any watch purchased at his establishment an ingeniously contrived revolving pendant bow, by which this mode-of-theft will be rendered impossible.  Eight day Watches – J Bennett has recently completed a selection of gold watches of superior quality, at 25 guineas each which require winding up but once a week.  Bennett’s model watches, in gold, from 12 guineas; in silver, 5 guineas; Bennett’s workman’s watch 3 guineas.  Bennett’s presentation watches 1st class, in gold, 40 guineas; in silver 20 guineas;  2d class, gold, 30 guineas; silver, 15 guineas; 3d class, gold 20 guineas; silver 10 guineas.  Every watch skilfully examined, timed and its performance guaranteed.  Watches sent free and safe by post.  Post-Office orders to John Bennett, watch manufactory, 65 Cheapside.


In the above you’ll note a super-confident attitude towards unconditional claim-making, (never mind watch-making), and a touching, (and definitely un-twenty-first century), belief in the reliability and integrity of the postal service.


John Bennett was born in 1814.  His parents, John and Elizabeth were watchmakers, living and working in Greenwich.  John Jnr carried on after their deaths, moving to the City in 1846 with premises at 65 Cheapside.  He eventually expanded these by taking over no. 64 and also had a presence at 62 Cornhill.  The business was successful and Bennett further elevated his status by becoming a councillor in the 1860s and a sheriff in 1871.  He was knighted in 1872.


Bennett’s ambitions in public life/politics were to an extent frustrated by the Establishment’s relatively negative reaction to his flamboyant style and manner.  As a response, he re-doubled his efforts in terms of commerciality, investing much energy and innovative thinking.  His advertising in newspapers/magazines was prolific and with high impact from the liberal use of illustration, (see below, left).  Having achieved Royal approval, he reiterated it to the public at every opportunity, both in print and, for example, with bold engraving on his products, see below, right). 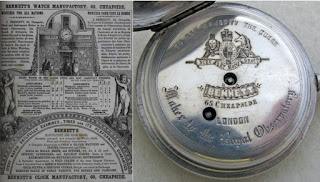 Note that the watch shown above proclaiming Royal patronage has a Swiss movement.  Ironic this as Sir John was one of the first high profile figures to stimulate public debate about the precarious position of the English watchmaking trade.  Complacent from a long period of technical and commercial superiority, the Trade had become uncompetitive in terms of product aesthetics, price, consequent loss of volume and erosion of profit margins.  The immediate threat was from the Swiss manufacturers.  One of the factors supporting the Swiss business model was the use of female workers, (their pay being less than that provided to men).  I am writing this in an England where last week a female lawyer caused a media frenzy over her withering riposte to a man’s compliments on the business networking website, LinkedIn, about her sexually attractive appearance.  I imagine Sir John might have experienced some of the same opprobrium if ‘Women’s Lib’ had already had a hold in the 1850s, when he advocated the employment of female watchmakers, (and, by implication, their adverse pay differential vis-à-vis their male counterparts).


But Sir John would no doubt have shrugged that off.  Among his characteristics were: persistence, a thick skin and plenty of cunning.  Consider this extract from Raymond Lamont Brown’s book, John Brown: Queen Victoria’s Highland Servant:


Over the years many tradesmen sought to curry favour with John Brown in the hope that this would bring them to a useful connection with the Queen.  One assiduous practitioner of such flattery was Sir John Bennett, watchmaker and jeweller in London’s Cheapside from 1846 to 1889.  After showing cases of jewellery to the Queen on one occasion, although she bought nothing, Bennett was advised by an equerry that he should share his lunch, which the Queen had authorised in the Steward’s Room at Windsor Castle, with John Brown and also do a little marketing.  So Bennett invited Brown and during the meal he obsequiously expressed his love for Deeside and all things Scottish.  For his part John Brown supplied wine from the Queen’s cellars to accompany the meal and a convivial afternoon resulted.  Thereafter courtiers noted that the Queen became a good customer of Bennett’s.


Sir John Bennett, the man who strove to defend English watchmaking yet turned profit by retailing Swiss made products was also the loving husband/father who had no less than seven children by his long term mistress.  One result of this was a revision to his will, which should have benefitted his wife and three children, but which then had to embrace his second ‘family’.  The estate was subject to an adjustment from £463 19s. 6d down to £88 9s. 6d.


But let’s not allow these little matters of unpleasantness to detract from Bennett’s industry, commerciality and pursuit of quality.  As to quality, one of his watches is included in the prestigious collection of the Worshipful Company of Clockmakers, catalogued as follows:


And here is one of his elegant pocket chronometers, #14097: 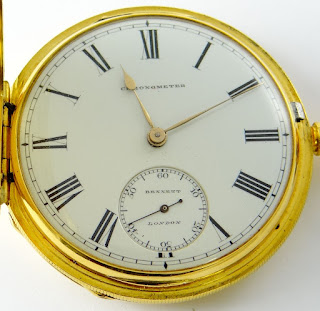 
Sir John died in 1897.  The business continued as a limited liability company until the 1930s.  Henry Ford bought the building itself and its external clock with its Gog and Magog figures.  It was rebuilt at Dearborn, Michigan within the Henry Ford Organisation’s Greenfield Village site.  For much more on this - https://www.thehenryford.org/exhibits/pic/2006/06_may.asp
Posted by davy26 at 07:30