What the Papers Said, Miscellany 2

An Apprentice's Lesson in Scrappage

This report appeared in The Public Advertiser, 18 January 1786:


The same afternoon, about five o’clock, William Linsley, apprentice to Mr. Gibbard, watch-maker, of Clerkenwell-close, was knocked down in St.John’s-square by a fellow, who, after beating him in a cruel manner, robbed him of a bag, containing a dozen silver watch cases.  The youth pursued the villain into Red-lion-street, where he threw the cases into the area of the house of Mr. Haines, surgeon; at which instant the lad caught hold of him, and with assistance took him before Mr. Blackborow, who committed him for trial.


William Linsley, 1771-1838, was a watchcase maker active in the first quarter of the nineteenth century.  His work included two complex, Turkish export market, multi-case sets made circa 1825 for Ralph Gout, who, like Linsley, was based in Bunhill Row near Moorfield. 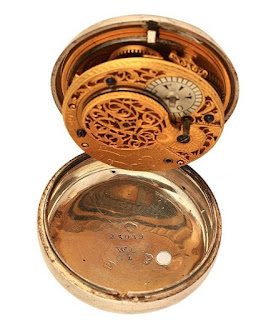 Ralph Gout #25019
The Linsley watchcases I have seen are nicely made and delicately decorated.  One tends to think that artisans like Linsley were bench-bound, relatively introverted types: it’s good to see, from the article above, (from The Public Advertiser 18 January 1786), that at least one was pretty fearless and very definitely robust!
Have you got the time luv?
The Times began a report on 16 April 1835 as follows:
Yesterday a dashing nymph of the pave´ named Charlotte Dutton was at Marylebone police-office brought up in custody in front of Mr Rawlinson.  She was charged by Mr Thomas Marchant, pawnbroker, on suspicion of having stolen a very valuable gold repeater, by Barwise.
Charlotte claimed it had been given to her by ‘a gentleman’ who called upon her at her apartments.  Mr Rawlinson asked her if this ‘gentleman’ was present in the police-office.  Affirming, she pointed at the man whom Mr Rawlinson then addressed:

Mr. RAWLINSON: What is your name Sir?
Witness (after some hesitation): Walker – Edward Walker.
Mr. RAWLINSON: Where do you reside?
Witness: At the Bedford Hotel, Covent-garden; but I don’t know why I should be obliged to answer the question.
Mr. RAWLINSON: This watch (producing it) is said to have been yours: now . . .
Witness (hastily): That’s quite correct; it was mine.  Barwise made it for me the beginning of last year and I paid him 95 guineas for it.
MR RAWLINSON: How does she become possessed of it?
Witness: I gave it to her voluntarily.  I know no more; and if you require further information about me or the watch, I can only refer you to Barwise.
Mr. RAWLINSON: I must have a little more from you yet Sir.  Pray how long have you known this female?
Witness (with much indifference): Perhaps a week or two.
Mr. RAWLINSON: I suppose she’s a girl of the town?
Witness (hastily): I don’t know.
Mr. RAWLINSON: What, give a watch worth 95 guineas to a girl whom you know so little about?  Now, tell me, doesn’t she live in a house of ill fame?
Witness (angrily): That’s no affair of mine; I gave her the watch.
Mr. RAWLINSON: What on earth could have induced you to give her so valuable an article?
Witness (with increased warmth): What is that to you, Sir?  It was my own and surely I had a right to do with it as I pleased.  I tell you again I paid Barwise 95 guineas for the article.
Mr. RAWLINSON: Well, Sir, it is my duty before I give it up to any one to make further inquiry respecting a man who can act so indiscreetly as you have done.  You may imagine . . .
Witness, who appeared in a very great passion, here quitted the office without waiting for the termination of the magistrate’s address.
Mr. Marchant mentioned to Mr. Rawlinson that he had ascertained from Mr. Barwise the correctness of the witness’s statement as to his purchase of the watch.  He had also received information that Mr. Walker had latterly come into the possession of considerable property, which he was squandering away in the most thoughtless and inconsiderate manner imaginable.  The executors were greatly grieved at the way in which he was going on, and he (Mr. Marchant) had no objection to give privately their residence (which was near at hand), if the magistrate wished it.
Mr. RAWLINSON having obtained their address, said that he should for the present cause the watch to be impounded in the office, in order that other inquiries might be made.
The prisoner, who said that Mr. Walker had been in the habit of visiting her, and that she had had the watch about three weeks, was then discharged.


What I believe could be called, ‘a happy ending’, (in which I understand ladies like Ms. Dutton have traditionally specialised).


CAPITAL WATCHES, MUSICAL CLOCKS, &c, By Mr. SERGEANT.  On the Premises, No. 49, St. John’s-street, Clerkenwell, on Wednesday, March 6, and following Days, at Eleven o’Clock, by Order of the Executors, THE valuable STOCK in TRADE of that well-known eminent Artist Mr. E. NORTON, Musical Clock and Watch-maker, deceased; comprising a great variety of excellent Gold Chronometer Horizontal Watches, curious Time-pieces and Regulators, of immense value, Musical and Chime Clocks, a profusion of unfinished Work, by the most skilful workmen, Models, Movements, Patterns, &c – To be viewed on Monday, the 4th of March, and to the Sales, where Catalogues may be had, and of Mr. Sergeant, No. 86 Cannon-street.


Eardley Norton is best known for the four dial astronomical clock he made for George III.  It is a very elegant object, as can be seen here: https://www.royalcollection.org.uk/collection/search#/1/collection/30432/astronomical-clock


Although he made many fine clocks, Norton was also acclaimed for the quality of his watches, several of which featured cylinder escapements.  Accordingly, his name was one of those applied by Swiss makers to the dials of their (mediocre) pocket watches destined for the English market in the nineteenth century, for example: http://www.antiquewatchstore.com/home/2425-eardley-norton-london-no-7315.html.  At least this sort of fakery allowed some of our great watchmakers to enjoy life after death . . . of a sort.


Epitaph
Just a piece of nonsense from The Public Advertiser, 25 October 1786:


EPITAPH on a WATCH-MAKER
HERE lies, in a horizontal position,
The outside case of
Peter Pendulum, Watch-maker,
Whose abilities in that line were an honour
To his profession
Integrity was the main spring
And prudence the regulator
Of all the actions of his life,
Humane, generous and liberal,
His hand never stopped
‘Til he had relieved distress.
So nicely regulated were all his motions
That he never went wrong
Except when set a going
By people
Who did not know
His key
Even then, he was easily
Set right again
He had the art of disposing his time
So well,
That his hours glided away
In one continued round
Of pleasure and delight,
‘Til an unlucky minute put a period to
His existence.
He departed this life
Wound up
In hopes of being taken in hand
By his Maker,
And of being thoroughly cleaned, repaired,
And set a-going
In the world to come.
Posted by davy26 at 09:23