. . . or, what a difference a few years make; in this case, 67.  33 years before the turn of the nineteenth century Richard Bucktrout made a little one: 34 years after 1800 John Elliott made a big one.  They are very different, and at the same time very representative of the change of style/fashion in the English gentleman’s watch across the 1800 ‘divide’.


Against the Elliott the Bucktrout looks tiny.  Out of its pair case the watch measures just 40 mm across – that’s slightly smaller than an Omega Speedmaster Professional wristwatch.  The dial is typical of the style that endured through the mid to late eighteenth century with Roman numerals for the hours and minute track ring/Arabic numbers at five minute intervals.  Complemented by ‘beetle & poker’ hands, this is a very attractive ‘look’.  In the pair case it weighs just 107g.  The movement is signed, R Bucktrout, London, #27.  The case bears the mark of its maker, James Richards, (registered from 1762).  His premises were at Bridgewater Square, St Giles, Cripplegate, and he enjoyed Freedom of the City of London.  Richards was born in 1730.  His son, Thomas, continued the business until his death in 1832.  In an interesting reflection of society and the times, Thomas Bryant, a servant of James Richards, was, in 1775, sentenced to Transportation for stealing five ounces of silver from his employer. 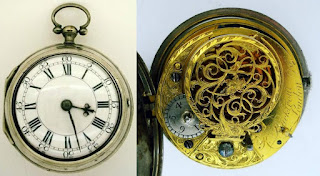 Out of its pair case the Elliott is 52mm ‘wide’ and the pendant is no less than 17mm long; weight is 175g.  The movement is #5242  The dial is simple – tumbling Arabic numerals for the hours and a minute track.  Hands are gold, spade form.  The case was made by Benjamin Norton of Banner Street, St Lukes.  Norton’s dates are 1783 – 1841. 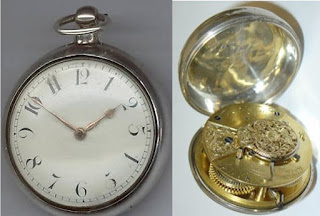 Neither watchmaker seems to be well known.  I have found no references to any other watches of Bucktrout’s manufacture*.  He is in Loomes: Wakefield. From London.  My researches suggest that Bucktrout was born in 1735.  A Richard Bucktrout is listed as working in Market Place, Wakefield between about 1770-84.  He may also have worked in Howden**, Yorkshire.  It may be that he did not see this (seven year) apprenticeship out, as an advertisement in The Leeds Intelligencer in as early as June 1770, announced: “RICHARD BUCKTROUT, WATCH-MAKER from London, begs leave to inform the Public, that he has opened a Shop in the Marketplace, Wakefield, where sells all Kinds of Horizontal, Repeating and Plain WATCHES; And also repairs all Kind of Watches, in the complete Manner, wholesale favour him with their Commands, may depend upon served upon the lowest Terms. He also sells GOLD RINGS, JEWELLERY GOODS, and makes MOURNING.”

** Present in the case of the Bucktrout watch is a watch paper for Thomas Richardson, Howden.


John Elliott seems to have managed to evade the Censuses from 1841 onwards.  A John Elliott was apprenticed to James Roberts, watchmaker of Ashford, Kent on 17 April 1794 for 5 years from 1 January 1794.  Loomes notes: Elliott John (& Son) Ashford 1802-51.  Elliot(t) & Son of Ashford appears in a 1855 trade directory at High Street, Ashford.  John was listed as a watchmaker, silversmith, stationer and bookseller, trading from premises opposite the White Hart Inn, High Street, Ashford.  In a 1858 directory the listing is: Elliott, John and son, booksellers, stationers, printers, circulating library, jewellers, watch and clock manufacturers, agent to the Phoenix Fire Office, High Street, Ashford.


I have found one other Elliott watch – this one #1095, from 1832.  Note that the dial is more traditional with its Roman numerals. 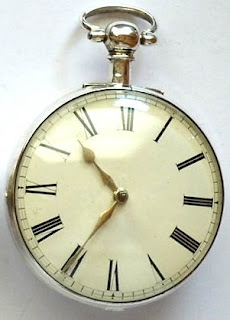