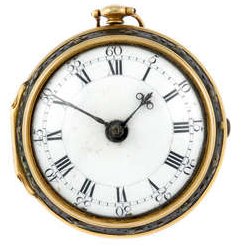 Photograph courtesy of Fellows
I was outbid recently on this Alexander Hare watch, #218.  Circa 1770, it has the classic later eighteenth century look and is in a shell case.  It seemed a good opportunity to acquire a watch by this superior maker at a reasonable price, since the dial was described as being in poor condition.  It made £520. 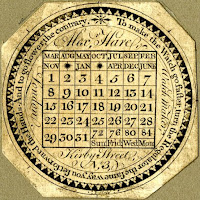 References to Hare are not easy to find.  Of an unexpected kind is this advertisement copy: "Mr. de Verdion, at Mr. Hare's, no. 17. Greville Street, Hatton Garden, teaches German, French, and English, In the most Expeditious Manner, And Upon the most Reasonable Terms. He also Translates into either of these Languages".

That Alexander Hare and his business remained prosperous towards the end of his life is perhaps evidenced by his having the means to bring a legal action in December 1821 against a neighbour whose building extension work was robbing the rear of Hare's premises of light and air; (there's nothing new under the sun).  (Reported in The Times, 6th December 1821).
Posted by davy26 at 06:08