At the same time as the decline of the English watchmaking trade was progressing, two major exhibitions were mounted in London extolling the quality of British commercial enterprise.  This was certainly appropriate in regard to the manufacture of chronometers in London, but, as far as more mundane pocket watches were concerned, the wares displayed by many of the exhibitors had been made on the continental mainland.  Thus the Great Exhibition of 1851 and the International Exhibition of 1862, tended to represent British horological excellence increasingly in the form of retailing, rather than of manufacturing, expertise. 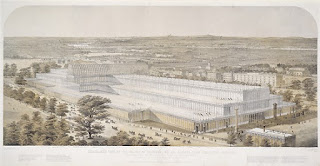 The event is well summarised in the V&A’s website, here. 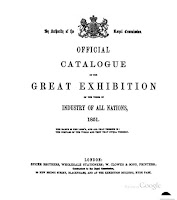 Horological exhibits are listed in the Catalogue in the section, ‘Class 10. Philosophical, Musical, Horological, and Surgical Instruments.’  47 entries relate to makers/vendors of pocket watches/chronometers, including:

1. Bennett, J. 65 Cheapside, Inv and Manu. . . . Marine chronometer.  Bennett’s model watch, on a magnified scale; constructed to show the most compact form of the modern watch, with all the recent improvements.  For more on Bennett, see The Old Watchword, post November 2015, here.

John Bennett was born in 1814.  His parents, John and Elizabeth were watchmakers, living and working in Greenwich.  John Jnr carried on after their deaths, moving to the City in 1846 with premises at 65 Cheapside.  He eventually expanded these by taking over no. 64 and also had a presence at 62 Cornhill.  The business was successful and Bennett further elevated his status by becoming a councillor in the 1860s and a sheriff in 1871.  He was knighted in 1872.

Bennett’s business was attuned to the prevailing conditions with considerable savvy.  He sought to cut manufacturing costs as a response to the erosion of English makers’ market share resulting from the price competitiveness of Swiss imports, (which he decried), yet he had no compunction about utilising Swiss movements himself in his products.  Equally, he was energetic in his approach to marketing, his press advertising being especially prolific, for example: 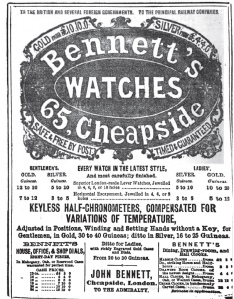 19. Delolme, H. 48 Rathbone Pl. Oxford St. Des. And Manu. – Gold watches, manufactured entirely in England.  Stethometer.  Marine chronometer.  I completed a study of Delolme’s life and work in February 2018.  Notice the difference in approach to the imports issue from that of Bennett whereby Delolme seeks to make an unconditional virtue of the fact that his products are, ‘manufactured entirely in England.’

Delolme did not however create his watches in London from scratch.  He utilised rough movements sourced from the Prescot (Lancashire) manufactories.  The London Daily News, 15 September 1851, reported Delolme’s exhibits as follows:

Mr. Delom (sic), of 48 Rathbone-place, exhibits a handsome collection of watches, containing many improvements in construction, the result of his long scientific experience.  By dispensing with the fusee he obtains more room for the other works, and is thus enabled to comply with the present taste for flat watches without any sacrifice of strength or durability.  The duty of the fusee in regulating the inequality of the mainspring is performed by an ingenious contrivance which he very learnedly calls an ‘isochrone pendulum spring’ – this sonorous epithet being the only part of his work which is not entirely of English manufacture.

Notice that Delolme lacked Bennett’s assertive marketing instinct – with modesty he refers to his prices as being, ‘comparatively moderate.’  His work though could be superlative, as seen, for example, in this Marine chronometer, #850, (c-1857): 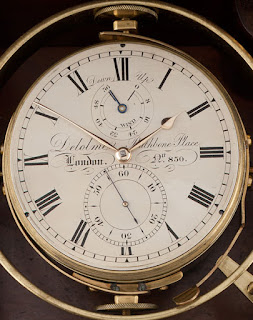 A fully illustrated overview of the firms involving members of the Barraud family over their long period of commercial activity – from c1840 through to the twentieth century – is provided here.

Barraud Marine chronometers were of especially good quality and a considerable number were purchased by the Admiralty.  The auxiliary compensation invention referred to in the Exhibition Catalogue text was unusual in that it was based simply on a weight affecting the balance wheel. 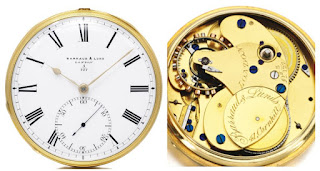 The highly respected partnership of William Parkinson and William Frodsham was established at 4 Change Alley in 1801 and was located there until 1842.  The business remained active, at Budge Row until 1947 – now that is longevity!

William Frodsham became an eminent spokesman for the English watchmaking trade – a natural development from his fulfilment of the role of Master of the Worshipful Company of Clockmakers in 1837/8.  In 1842 Frodsham was a leading opponent of the proposed British Watch and Clockmaking Company, by which Pierre Frederic Ingold intended to establish modern factory-model manufacturing as a means of making English products price-competitive with Swiss imports.

The Frodsham family became one of the very most important in British horological history.  William’s son, Charles, was already a successful maker in his own right by the time of the Great Exhibition, at which he was awarded a first class medal, his entry in the Catalogue reading:

Charles Frodsham & Co Ltd trades contemporarily and on its website claims to be ‘the longest continuously trading firm of chronometer manufacturers in the world . . .’  Charles became every bit as influential as his father, and followed him as Master of the Worshipful Company of Clockmakers.

Charles was just one of William’s four sons, the others being, Henry, George and John, and they, and their descendants, forged careers in the Trade, helping to establish several firms: Frodsham & Co., G. E. Frodsham, Frodsham & Baker, Frodsham & Keen, Arnold & Frodsham. 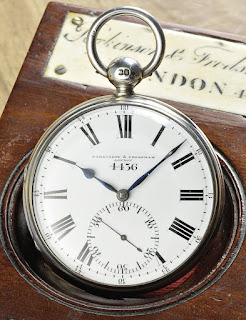 Edward John Dent, though not its original inventor, developed the dipleidoscope for practical use and patented it in 1843.  It is a device which supports the accurate setting of timepieces by observation of the position of the sun or moon.  As might readily be imagined, complex instructions were necessary, and Dent wrote a detailed user’s manual: 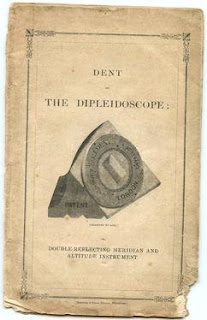 Dent’s business and more conventional – and very fine – products are covered in the 2015 post here, and here. His Marine chronometers were considered to be first class.  This example, dating from c-1850 is #2254: 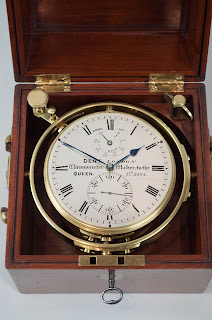 My study of Watkins was published in the April and May 2016 issues of Clocks Magazine.  I have also featured his work here in the 2016 posts, here, and here.

In a future post here I will look at some of the watchmakers represented at the 1862 International Exhibition.