A Dodgy Turpin? - Surely Not

In 2014 Daniel Alexander QC heard an appeal concerning a dispute involving trade marks.  Two companies operating in the food wholesaling sector had been at loggerheads over the use of very similar corporate I.D. logos.  The fact that one of the companies was run by the uncle of the other’s owner only seemed to make the conflict all the more bitter.  In denying the appeal, Mr Alexander cited a ‘common ancestor’ precedent, ‘the most well-known example of this being the 1861 case of Dent v Turpin.  Edward Dent had two clock shops in London and had bequeathed one each to his two stepsons.  Both traded legitimately as ‘Dent’, and it is clear that neither could have brought an action to stop the other.  Either or both was entitled to bring an action to stop a third party, Mr Turpin, from using the Dent name.’  The Times on 24 April 1861 reported:


The defendants, Henry and George Turpin, were watchmakers at 62 Banner-street, St. Luke’s, Middlesex, and had been in the habit of placing the words “Dent, London,” upon watches manufactured by them.  These watches were sold by Turpin Brothers to the other defendants, who carried on business as general export merchants, and had exported several of the watches to the Cape of Good Hope.


The Dent name was a byword for quality and integrity and embraced a watchmaking dynasty which excelled throughout the nineteenth century.  For the first 54 years, the main business, founded by Edward, was managed by himself and members of his family.  Subsequently trading under various ownerships – and until the 1920s as two enterprises: ‘E. Dent’ and ‘M.F. Dent’ - the business has maintained a continuous commercial presence through to the present day.  A comprehensive summary of the company’s history is set out at http://www.dentlondon.com/about/history.php


Notice of the injunction, (in this instance on behalf of the M.F. ‘branch’ of the business), was published in The Times, for example on 19 July 1861:


DENT’s CHRONOMETERS, Watches, and Clocks – Caution – Her Majesty’s High Court of Chancery, on the 11th of July, 1861, granted a perpetual INJUNCTION, restraining Henry William Turpin, George Hathaway Turpin and Adolphe Mosenthal respectively, from manufacturing any watches marked with the name of “Dent,” and from selling or exporting, or causing to be sold or exported for sale, any watches made and marked with the name of “Dent” by them or by their order or direction.  Manufacturers and others are hereby cautioned against using the name or trade mark of “Dent.”
TUCKER and NEW, 25 Clement’s-lane, city, Solicitors for M.F. Dent, 33 and 34 Cockspur-street, Charing-cross, London.


With the Dent v Turpin action in mind, let’s consider why the Dent name would be one the defendants thought worth ‘borrowing’ in order to enhance the value of their products.  Dent began working as an apprentice to his cousin, Richard Rippon.  The early years of his career were especially important in establishing his credentials in the top quality sector of the Trade – he worked for two of the best: Vulliamy & Son and Barraud & Son, and with both he was a specialist in complications and chronometer movements.  This built a reputation good enough to induce the highly regarded John Arnold to take Dent into partnership.  Thus, from 1830, as half of Arnold & Dent, Edward was associated with the very best quality chronometers being made in England – and, therefore, the world.  The key elements of Dent’s prestige standing in the early Victorian era are summarised in the table below: 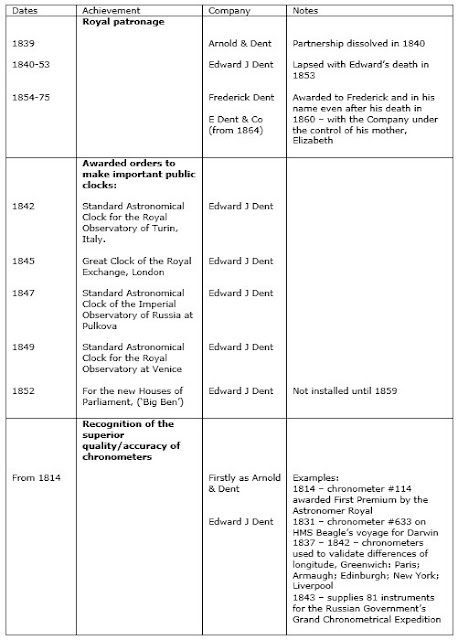 The Turpin business was begun by Benjamin around 1817 at 62 Banner Street, which runs parallel with and just south of Old Street in the St Luke’s area of London.  Benjamin was born circa 1791, within a year or two of Edward Dent.  Although Benjamin’s country of origin is unknown, it is notable that his sons sought Naturalisation in 1854, in the process of which their Jewish faith was recorded.
Benjamin’s output does not seem to have been noteworthy and I have been unable to find any extant examples.  He died in 1842, and his widow, Susannah, carried on the business to 1849.  His sons, George (1826-76) and Henry (1827-85) then took over, trading as Turpin Bros.  The Business was listed at Banner Street through to the 1880s, for example in the category, ‘Watch Manufacturers to the Trade’, in Collinson’s Directory of 1861.  Britten’s notes that they exported full plate watches, including a model called ‘Railway Timekeeper’, to America.  This ‘type’ is generic – it was applied to relatively cheap/simple timepieces, often of Swiss/Austrian origin.  Bearing in mind the Dent injunction, it’s fair to say that Turpin Bros could be seen as again indulging in a spot of deception because, as with most of these ‘Railway Timekeepers,’ there was an implied superior standard of accuracy, (associated with the idea that the railways then were very well and punctually operated), which the movement was not in fact good enough to deliver.
This is a gold hunter – date unknown – by Turpin Brothers: 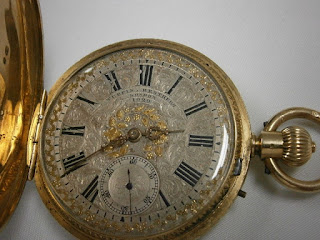 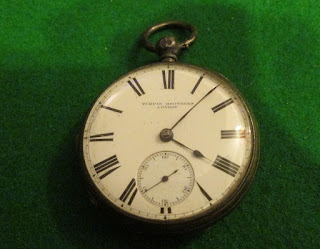 Neither, I’m afraid bears comparison with a Dent watch!  No wonder the Dent companies were keen to ensure that their name didn’t appear on such mediocre timepieces.
Posted by davy26 at 03:55