What the Papers Said, Miscellany 1

When researching the history of a watch or the life/work of a watchmaker, I am always hopeful that movement numbers are apparent – and now the difficult aspect – and accurate!  Very often they are not.  Incremental sequences of numbers frequently come into doubt when trying to verify against the supposed date of manufacture based on case hallmarkings, (which themselves are not always clear and may be on a later re-case).  Sometimes the numbers themselves are just too ‘big’ to be believable given the size of the maker’s business/the length of time for which it was operational.  Then there is the little matter of deliberate alteration.  As an example of this, here is an account of the activities of Andrew Springhalter, as reported in The Times, 7 April 1865:


Police-sergeant Evans 22G, an active plain-clothes officer, said that a few days since he saw the prisoner coming down Spencer-street, Clerkenwell, and, suspecting that all was not correct, he followed him and saw him go into a pawnbroker’s shop.  He went in and asked the prisoner what he had got there, and he said, “Nothing,” and the pawnbroker at that moment said he was making out a duplicate for a watch that the prisoner had offered in pawn.  He then took the prisoner into custody, and on going to the prisoner’s residence he found a number of duplicates relating to watches and other jewelry, and on a bench a number of watch cases quite new, and some plates of watches.  All the numbers of the watches were altered by the addition of a number, the alteration of some of some of the original numbers, and the names on some of the plates had been changed, and in some cases names had been added.  A large number of the watches had been stolen from a jeweller’s at Dudley.
Mr. Hamilton, of Southampton-street, Pentonville, said,- I am an engraver, and do a large business for watchmakers.  I altered the figures on the seven watches produced at the direction of the prisoner.  Some of the watches have had figures added, and others have been altered.  The numbers on the silver watches 13684 have been altered to 136846, 49086 to 490861, 15237 to 452571, 15385 to 145383, 15978 to 459781 and 15962 to 459641.  On one the name of “Neal, Wandsworth,” has been added, and on the others the following names have been added, “Alfred Gold, Islington;” “S. Morris, Notting-hill, London;” “John Jones, 338, Strand;” and “Henshaw, High Holborn.”  Some of the names belong to legitimate makers, and the others are mere fancy names.  The prisoner has not before engaged me in similar work.
Cross-examined by Mr. Pater. – I did not think that it was unusual when I was asked to alter these numbers.  I do not know that it is usual to put a good name in bad watches so that they may sell better.  I have been an engraver for 20 years.  I have often put names on watches where there have not been any before.  I received all the watches together, and altered them the same day.  I altered them the day previous to the police sergeant calling for them.  I have known the prisoner as a working jeweller for the past six months, and I have always found him an honest, respectable man.
Depreciation:
Whilst high-end wristwatches seem to hold their value quite well nowadays, many expensive motor cars certainly do not.  But there’s nothing new under sun.  From The Times, 9 December 1826, an eye watering 41% depreciation rate on a watch for which you’d be paying a fortune in 2015:


A BARGAIN. – GOLD REPEATER, by an eminent London maker, the real property of a Gentleman. – A GOLD REPEATER, strikes the hours, quarters, and half quarters, has a rich chased double bottomed gold case, gold dial, the movement duplex, with seconds, and jewelled in 5 holes, ruby cylinder, cost 85 guineas, to be SOLD for 50 guineas, nearly new.  Apply to Mr. Jarman, dealer in articles of curiosity, 30, St.James-street.


Looking at the quality of this example of his products, it’s not surprising that he had ‘visitors’, as related in The Public Advertiser in March 1758: 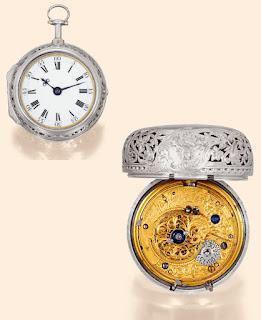 
HENRY CAPT’S GENEVA WATCHES. Henry Capt is the only Watch Manufacturer of Geneva having a branch retail house in London, Specialist of Repeaters, Chronographs, and other high-class Watches.  Workmen from Geneva fro repairs,- London Branch, 151, Regent-street.
This was his advertisement in The Times, 4 June 1879.


He certainly was not complacent.  Having established a market advantage, he continued to seek innovation, including, for instance, being the pioneer Swiss maker to submit his products to The King’s Observatory for validation as a ‘chronometer’.


A little extra care is needed when considering ‘Henry Capt’ watches/history.  There are many references to the very high quality products of the early nineteenth century.  These included all sorts of complication, including musical features and they were often beautifully decorative.  By the time of the advertisement shown above, Capt’s products were much more mainstream, though still noted as being of good quality.  By that time the firm was directed by the original Henry’s nephew, also ‘Henry’.  Things are also complicated by variations in the spelling of the first name, Henry/Henri, and by the succession of partnerships.  I have created this basic summary to provide, I hope, better clarity: