The Richard Websters – Persistence Pays Off

Four generations of watchmakers carried the Christian name and the business:


There were ups and downs, from multiple bankruptcies to award-winning in the Royal Observatory trials: persistence certainly paid off for ‘Richard Webster’.


Richard I
Son of the eminent watchmaker, William Webster, who became Master of the Clockmakers Company in 1755.  Richard I was admitted to the Company in 1779.  His premises were at 26 Exchange Alley.  The business failed, partly because of gambling debts, in 1802. 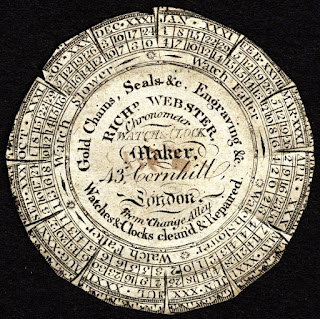 
This is to give notice, that the Court acting in the prosecution of a Fiat in Bankruptcy, awarded and issued forth on the 20th day of February, 1849, against Richard Webster and Richard Webster the younger, of No. 74, Cornhill, in the city of London, Chronometer Makers and Watch and Clock Manufacturers, will sit on the 24th day of June, 1886, at eleven o’clock in the forenoon precisely, at Bankruptcy-buildings, 84, Lincoln’s –inn-fields, in the county of Middlesex, in order to make a Dividend of the joint estate and effects of the said Bankrupts, when and where the creditors who have not already proved their debts are to come prepared to prove the same, or they will be excluded the benefit of the said Dividend; and all claims not then proved will be disallowed.


(That is one sentence, and ‘Bankruptcy-buildings' is surely from the pen of Spike Milligan!).

An example of his work is included in the collection of the Worshipful Company of Clockmakers:
#404 Richard Webster, England, c1820.  Movement only.  Enamel dial signed ‘Webster 3384.’  Subsidiary seconds dial.  Gold spade hands.  Bi-metallic compensation curb.  Plain brass balance.  Signed ‘Rd Webster. Change Alley London no 3384’.  This must be the Richard Webster who took over from his father, Richard, in 1802, at the age of 17.  See Antiquarian Horology, September 1955, p109.  Diameter 46mm.  Presented by A. & J. Smith, Dublin, 1934


As described by Bonhams, this is also by Richard II: 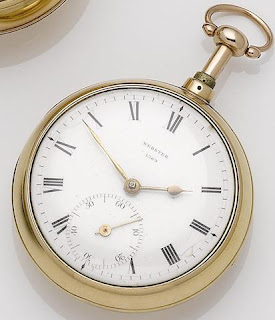 
An early 19th century 18ct gold quarter repeating open face pocket watch
London hallmark for 1808.  Gilt full plate cylinder movement with flat gilt 3-arm balance and diamond end stone, round pillars, two polished hammers striking on a bell held in the back of the case, enamel dial with black Roman numerals and outer five minute divisions, gilt spade hands, subsidiary seconds at 6, pierced and engraved inner case sides, held within polished round hinged outer, push repeat via the stem, strike-silent button in the band, dial signed and numbered 3369, movement signed and numbered 3370.  55mm.
One of his chronometers as described below by Christies is shown at:


Richard III
Son of Richard II.  Finished his apprenticeship to his father in 1844.  He ran an additional business in Paris.  He occupied premises at the newly-developed 5 Queen Victoria Street from 1872.  In the 1881 Census he is recorded as at 57 Marquess Road, Islington, widowed and living with his three daughters and two sons, (and two servants).  He died in 1882.  Here, below, is a mid-nineteenth century Webster advertisement typical of the kind he took in The Times:


WEBSTER – WATCHES, Chronometers, and Clocks, by R. WEBSTER, chronometer maker to the Lords of the Admiralty, the East India Company, &c., at as low a price as is consistent with maintaining that character for superiority of workmanship which has distinguished his house for a century and a half.  The prizes given by Government for the best performing chronometers were awarded to R. Webster three years in succession.  Established A.D. 1711 – 74, Cornhill.

Richard Godfrey Webster
Son of Richard III.  He is recorded as a chronometer maker at 5 Queen Victoria Street from 1876.  It seems likely that he allowed non-commercial interests to distract his attention from the business itself.  For example, he was a notably active Fellow of the Royal Astronomical Society.  Also, he frequently contributed writings under the name ‘Cornhill’ to the journal of the British Horological Institute.  In an attempt to save the ailing company, his wife took over in 1904, ending the long father>son succession.  The business continued until 1914, trading as Webster Co/R. Webster Ltd.
Posted by davy26 at 08:25