Of Orbits and Tangents

Tangents are a hazard – actually a great source of pleasure – for anyone researching the history of horology.


Looking in detail into the Ellicott dynasty, I was especially struck by the beauty of the dial of John Jnr’s Equation of Time watch, circa 1747: 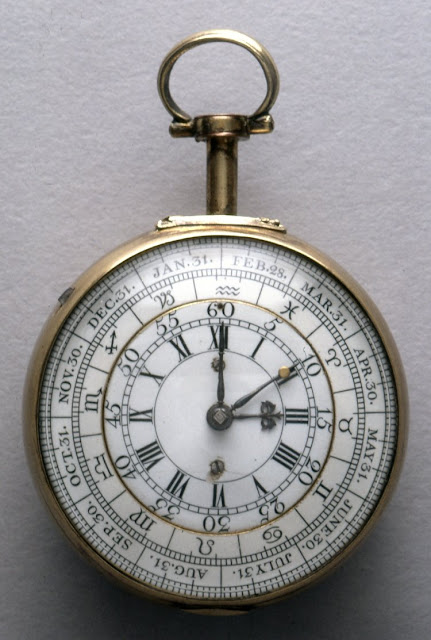 
Equation of Time ? WHAT is that; I thought I knew, but the dial confused me, so I looked it up:
Tangent!


Two factors cause the true length of a day on Earth to vary:


As a result, it is sometimes more, and sometimes less, than 24 hours between successive noons.  Surprisingly, it is only exactly 24 hours four times a year: 15 April; 14 June; 1 September; 24 December.


·         Sidereal Time – the same principle as solar time, but the measurement is made relative to the position of a specific star on two successive days


A Solar Time day can be as much as approximately 14 minutes more or less than 24 hours Mean Time.


The ‘Equation of Time’ on any given day is the value – i.e. number of minutes, plus or minus – to apply to the Mean Time in order to ‘read’ Solar Time.


A practical benefit – admittedly more relevant in the eighteenth century – is that an Equation of Time clock or watch can be set by reference to a sun dial.


Because the variances – and the four ’24 hour’ day dates – are the same every year, a mechanical complication can be added to a clock or watch to provide an indication of the Equation of Time.  The indicating hand is driven by a once-a-year revolving cam.


To me a complication like this is just something to be enjoyed for its technical and aesthetic attributes, although some people seem to be overly concerned with what practical use it might have.  In the eighteenth century, as watches with this feature began to appear, ownership would surely have been a serious status indicator.


Equally, the capability to make such a watch would have been a powerful achievement to boast, raising the maker’s reputation and ability to command higher prices for his products.  It’s not surprising therefore that John Ellicott Jnr was keen to have his name on Equation of Time watches.  Whilst his father had begun the firm and made it one of high standing, John Jnr greatly enhanced its reputation and profitability through innovation.  For instance, he introduced cylinder escapement watches to the Ellicott catalogue and ensured that it also included repeaters and chronographs.  Alongside his flair for commerciality, John Jnr was also innovative in developing temperature compensation solutions.


But . . . the question has to be asked: did Ellicott actually have the in-house capability to make an Equation of Time watch?


Antiquarian Horology published two extensive surveys of the Ellicott firm:  by R.K. Foulkes, September 1960 and by David Thompson, June/September 1997.  In the latter a list of ‘known’ watches is appended.  At its heading it includes an abbreviation reference of ‘eq’ for an ‘equation watch’.  Interestingly, the list – of no less than 199 watches - does not feature a single one of the ‘eq’ type.


Each of the three watches has a high quality movement with cylinder escapement and all are furnished with bolt and shutter maintaining power.  It is possible they represent the earliest examples of a watch with any form of maintaining power.


The question of authorship of these watches was the subject of an article by Anthony Turner and Andrew Crisford in Antiquarian Horology in 1977.  The characteristics in the design and construction of the movements leave little doubt that they are the work of Thomas Mudge.


The Turner/Crisford article relates the story of an Equation of Time watch signed by Ellicott and supplied to Ferdinand VI of Spain which became in need of repair.  When it emerged that the Ellicott firm itself could not undertake this, the King’s clockmaker, Irishman, Michael Smith, identified Thomas Mudge as the actual maker.


My view of this is that whilst Mudge was the more technically accomplished, Ellicott was the more successful marketeer, able to penetrate niche markets and capture high profile clients.
Posted by davy26 at 08:26