A Watch To Die For

The name Earnshaw is very well known in horological circles.  Thomas Earnshaw, (1749-1829), was primarily concerned with the development of the chronometer, especially through two innovations: the first use in England of the detached detent escapement and the bimetallic compensation balance.  His results were significant enough for the Board of Longitude to grant him an award of £2,500 in 1805.  The Earnshaw business, located at 119 High Holborn, flourished through to the latter half of the nineteenth century, son and grandson, also both ‘Thomas’, successively taking the helm.  In October 1802 another son, William, was working in the shop.  That day he dealt with a man seeking a chronometer that proved, literally, to be ‘to die for’.


At the trial of that man – Francis Finlay – Earnshaw gave an account of the fraud with which Finlay was charged.  It was sufficiently clear, and well corroborated by other witnesses, to lead to a ‘guilty’ verdict.  Finlay did not deny his guilt and sought mercy only on the grounds that he had been insane when the offence had been committed.
Francis Finlay had been born in Boston, Lincolnshire in 1776.  Well brought up and provided for, Finlay obtained an Army officer’s commission and achieved promotion to the rank of Lieutenant.  However, in his personal life things went amiss – he became, in the contemporary parlance, a libertine, and this meant that there were many bills to pay for ‘entertainments’.  He raised some money by selling his commission, but, with a wife and young daughter to support, things became desperate.  As a solution he set about obtaining one of Thomas Earnshaw’s highly acclaimed gold chronometers, intending to sell it on without ceremony.
Lacking the necessary cash - £65 – Finlay had forged two bills of exchange which he tendered to William Earnshaw.  William smelt a rat and sent his assistant out straight away to have them fulfilled: they were declined and identified as forgeries.
Finlay meanwhile had also raised suspicion at Birkitt’s – a pawnbroker – when he offered the chronometer for pledge.  Birkett detained Finlay until he was arrested and taken into official custody.  At his trial on 3 December 1802 Finlay was sentenced to death and subsequently hung on 9 February 1803.  To emphasise the contrast between now and then, not only in judicial values, but also in sensibilities, here is a quote from the contemporary, ‘The New Newgate Calendar, Volume 4’:
No man ever behaved with more resignation and manly fortitude in such a situation.  He seemed to be in agony for the space of three minutes, after he was turned off, during which time he held a white pocket-hankerchief in his hand, but afterwards dropped it.
The body was cut down after it had hung the usual time, and carried to Newgate prison.  At one o’clock, a hearse attended to convey it away; but upon being inspected by the sheriffs, it was found to be still warm, though it had been cut down three hours before. 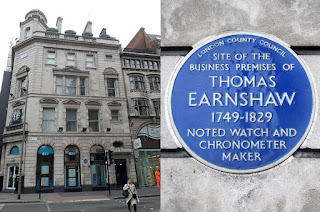 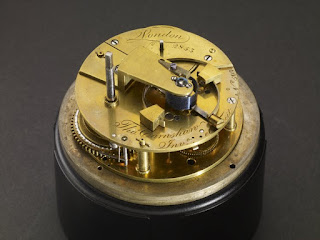 One Day Marine Chronometer #509, circa 1800
© Trustees of the British Museum


Today Thomas Earnshaw is a wristwatch brand.  Its website has an excellent page with a pictorial history of man and products - http://www.thomas-earnshaw.com/pages/thomas-earnshaw-1749-1829
Posted by davy26 at 12:15