The Royal Exchange, sandwiched between Cornhill and Threadneedle Street in the heart of the City of London, opened in 1571.  It was Thomas Gresham’s idea to provide this centre for commerce in England’s capital. 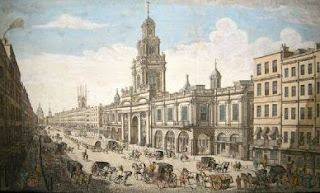 The Royal Exchange, circa 1760 by Thomas Bowles
Courtesy www.albion-prints.com


On March 25 1748 a fire occurred around the Lombard Street side.  A good deal of damage resulted, as can be seen in the map below: 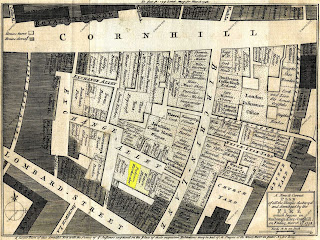 (The building was affected by fire – much more severely – on two other occasions, the last being in October 1844).  For a comprehensive account of the Royal Exchange, see:http://www.british-history.ac.uk/old-new-london/vol1/pp494-513


Close study of the map will reveal a great variety of trades operating in the Exchange, but there is just one watchmaker – the premises marked in yellow – Richard Peckover*.


Peckover was born in 1685, the son of John and Ursula Peckover of St. Giles Cripplegate.  He was apprenticed in 1700 to John Benson.  He took over the renowned Daniel Quare/Stephen Horseman business following the latter’s bankruptcy in 1730:


Whereas a Commission of Bankrupt is awarded against Stephen Horseman, of Exchange Alley, London, Citizen and Clockmaker, and he being declared a Bankrupt, is hereby required to surrender himself to the Commissioners on the 8th, 15th and 18th Instant, at Three in the Afternoon, at Guildhall, London, and make a full Discovery of his Estate and Effects; when and where the Creditors are to come prepared to prove their Debts, and pay Contribution-Money, and at the first Sitting the Commissioners will appoint Assignees.  All Persons indebted to the said Bankrupt, or that have any of his Effects, are not to pay of deliver. . .
The London Gazette 28 November 1730

Peckover is recorded in Exchange Alley from 1733.  He continued Horseman’s movement numbering system, previous researchers saying that this was in the range: 6480 to 7377.  However, as can be deduced from the illustration below, his ultimate number would have been at least 7408.


Records, including Baillie, show Peckover at Cornhill and Royal Exchange – he may in fact have simply retained the Quare/Horseman premises, as Exchange/Change Alley and Cornhill are feasible address variants for a location within the Royal Exchange complex.


An opulent example of Peckover’s work is held at the Metropolitan Museum of Art, New York.  Made for the Far East export market, the case features both gold and diamonds – real eighteenth century bling!  The movement is numbered 6480: 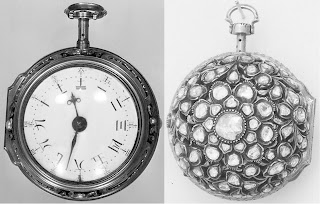 Courtesy of Metropolitan Museum of Art


* Although not shown on this map of The Royal Exchange, the following watchmakers are known to have worked there during the eighteenth century: James McCabe; John Ellicott; Francis Perigal & Son; Richard Webster; Robert Best; David Evans; John Cowell; Thomas Hawkins.